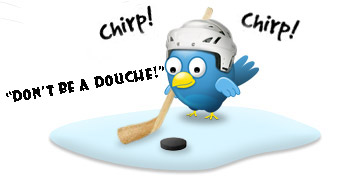 Trade Deadline Day is a big day in the hockey world. Some call it an unofficial holiday, some call it a waste of time, but all hockey fans will tune in or follow along. To make the day go as smoothly as possible, there are some important rules you have to follow if you're going to be tracking trade talk on Twitter. It's very easy to annoy people or cause shit on Trade Deadline Day, so here here are a few rules and tips on how to avoid being the Sean Avery of your Twitter feed.

Don't Complain About The Lack Of Trades
It's a long day, so don't get grumpy if there are no trades made by 10am or if the number of deadline deals are well below past years, because quite frankly, nobody cares. If you are bored, go do something else rather than refresh your Twitter feed and surf between the Trade Deadline Shows. Go in with low expectations, come out high (possibly off a certain substance).
Don't Retweet Bob McKenzie, Darren Dreger, Pierre LeBrun, Gord Miller, Or Any Person That Gets Paid To Talk About Hockey
If anyone cares about trade deadline day they are following these people. They don't need you to relay this information to them as they are already getting it. The worst offenders are those quote their tweets and make it look like they broke the trade - douchebags.
Don't Even Mention Eklund.
Just don't. Nobody needs to hear ridiculous rumours or (e5)'s 2 minutes after a trade is announced.
Don't Create A Fake Account
Creating a fake account is a really big douchebag move, and it bothers us to no end that people are fooled by them to retweet the deals (even though you shouldn't be retweeting anyways!).

Know Your Hockey Insiders
See these Twitter handles? @TSNBobMckenzie, @Real_ESPNLeBrun, @DarrenDreger, @GMillerTSN. They all have a white check mark inside a blue cloud that means they're verified. These are legitimate trade breakers so if you see any dashes added to them they're fakes. Don't be fooled. The sleeper cell fakes are already coming out leading up to deadline day - see fake Linus Omark Facebook account - and there will be plenty more, so stay on your toes when reading breaking news.
Once Again, Don't Even Fucking Mention Eklund.
He is a hack and makes up rumours to make money.

Have a great Trade Deadline Day!
Posted by Dirty Dangle at 1:45 AM
Email ThisBlogThis!Share to TwitterShare to FacebookShare to Pinterest