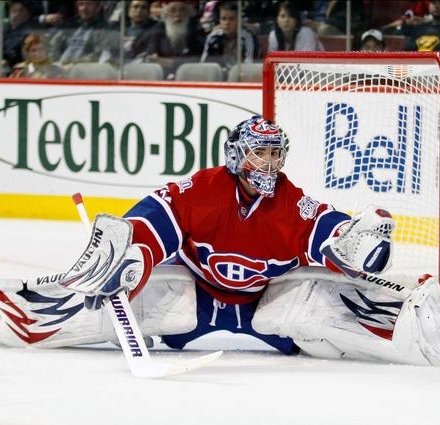 Being a Montreal Canadien has its own pressures as Carey Price has found out over the last few years, but when you compare other goaltenders in the league there may be only one other goalie who has to play under the same pressure and that would be Roberto Luongo. The main difference between the two is Carey Price doesn’t have the luxury of two Art Ross winners playing in front of him.

I became a Carey Price fan during the 2007 WJHC where he was tournament MVP, Top Goaltender and of course the main reason why Canada won gold that year. How could you not like this kid, he was young, talented and played with just enough attitude that players could respect him. Even though I am not a Habs fan, I am a Price fan and I feel he hasn’t been treated the fairest over the last few years and has been forced to grow up pretty fast.

Let’s face it, he is playing in one of the MOST demanding markets in all sports, and he has NO forwards who can score on a consistent basis, or an annual basis for that matter. Since he joined Montreal, there has only been one player to score 30 goals or 80 points and that person was Alexei Kovalev. Even then, he did that once with Montreal and that was back in 07/08. Since then, it has been all downhill offensively for Montreal. Even defensively, Montreal has struggled as they are currently playing Andrei Markov to just have surgery after surgery (before you know it, he could be getting implants which would give some of the injured guys something to do in the pressbox).

2014 is going to be the next huge year for Canadian Hockey as we defend our Olympic gold medal in Sochi and it is a no brainer to say Carey Price will be included on a short list of potential goaltenders for Team Canada. Regardless of what happens in Montreal over the next couple years, Carey will have the chance to prove himself yet again on the international stage and to be honest with you, between Luongo, Fleury and Price in goal for the gold medal, I personally would want Price!

Carey Price has many rookie cards like most players who started in the NHL after 1990 and they can range in value from $3.00 for his 07/08 Ovation rookie (which I sent to get autographed) all the way up to his 07/08 The Cup rookie which will cost in the ballpark of $1500. Unlike some of the other returns I have had in the past, I actually have a few different rookies of Carey Price with the most valuable being his Young Gun rookie card. Here is the photo what the Young Gun rookie looks like (this isn’t my copy): 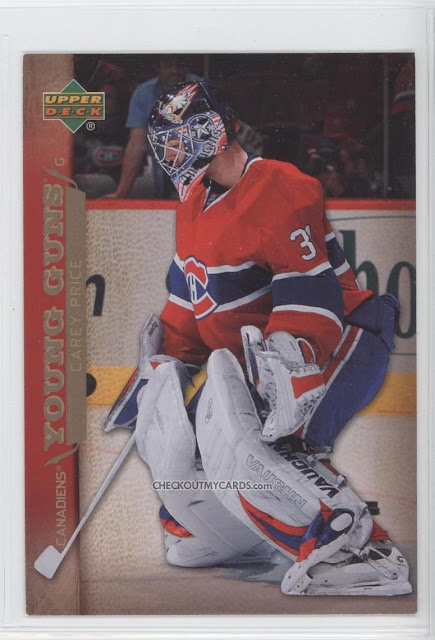 This card used to be worth around 100 bucks during his rookie season, but since then the market has cooled on him a little bit and it books for about 50 bucks.

The autograph I received was certainly not the one I hoped for as Carey did a card switcheroo! Unlike my Bathgate switcheroo, I got the low end of this deal as my Ovation Carey Price rookie was switched for a 10/11 OPC Carey Price card. 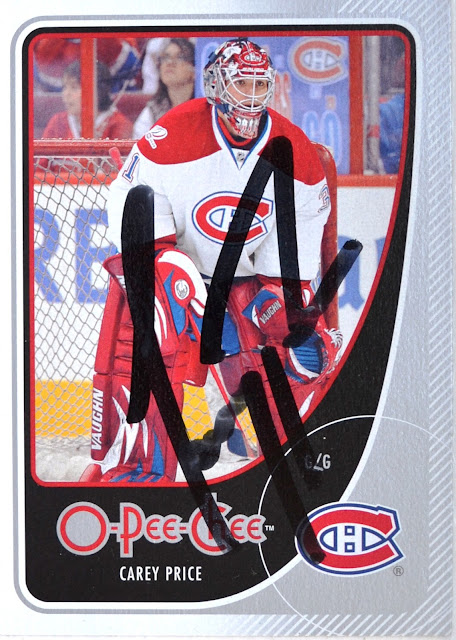 The card isn’t terribly attractive, but it is signed and to get an auto from a current star is sometimes all a fella can hope for! I mailed this one away not too sure what to expect and after a few months I wasn’t sure it was ever going to come back. However, lady luck did shine when the card arrived and I am appreciative of the auto even though it wasn’t what I hoped for exactly.
Posted by Dirty Dangle at 2:35 PM
Email ThisBlogThis!Share to TwitterShare to FacebookShare to Pinterest