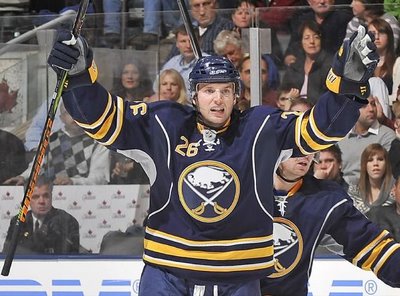 This week’s auto is from Thomas Vanek who some may not know, is the GREATEST hockey player in the history of Austria and is currently 9th among active players in goals per game (tied with Marian Hossa and just behind Jarome Iginla). One neat fact is there have been just 9 players born in Austria who have made it all the way to the NHL. From that list, I would have to say that Michael Grabner would be the next best Austrian born hockey player which unfortunately exposes everyone to the less than stellar talent that has left that country over the last 30 years. However, having a very talented NHLer from Austria could help expose more children and people to the game which in turn could inspire the next great player to lace up some skates.

Vanek is a player who I really enjoy watching and is an underrated sniper in my opinion. Maybe it's because he plays in a small market or maybe because he isn’t cocky, but I imagine some people would be surprised to know that Vanek has averaged 34 goals a year during his first 6 full NHL seasons. Vanek has never scored few than 25 goals in a season (and that was his rookie year) and this season is on pace for 29 goals and 63 points which is a little low for him and is partially due to a poor January which saw him score 2 points in 12 games before going out for a couple games with an upper-body injury.

In the hobby world, Vanek’s cards do receive some respect and are often on par with other player’s cards like Ryan Getzlaf, Zach Parise and Mike Richards. His most expensive rookie card is his 05-06 UD The Cup Rookie which sells for around $350. I don’t have that one, I instead own his much more affordable 05-06 Power Play Rookie which sells for 8 bucks. 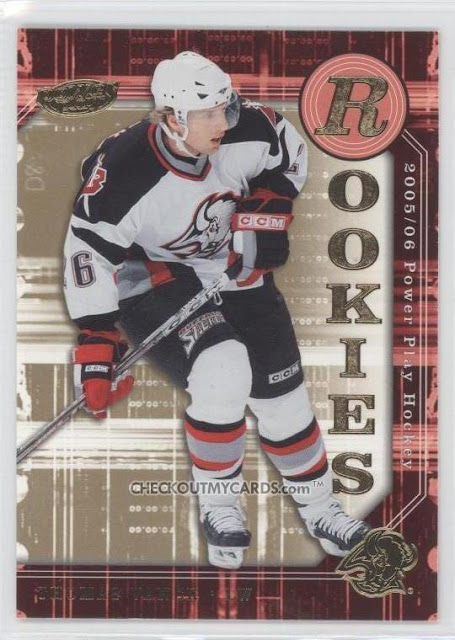 The cards I mailed away were two insert cards and I was lucky enough to have them both returned and signed! 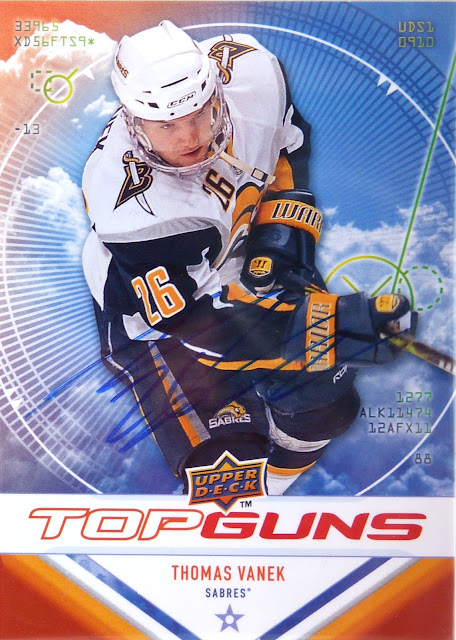 This first auto is the nicer of the two cards in terms of design. I liked the Top Guns insert set UD put out two years ago in their product. This card doesn’t display the auto as good as I thought, maybe because of the blue sharpie on the blue background. I really like that he also signs his auto with his number 26 which you can notice better in person. 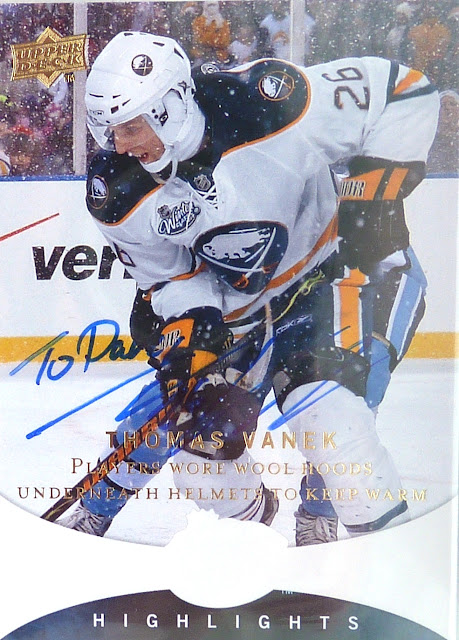 I had an idea that this card would have been a great one for an auto given the big white space on the bottom of the card (which was an error on UD’s part). Thomas didn’t think that space would be good for an auto and signed above it, but he did personalize the card which I thought was an even better idea.

So two autos from the greatest Austrian hockey player was a pretty sweet success if you ask me, next post will be a TTM success that involved me getting robbed!
Posted by Dirty Dangle at 4:21 PM
Email ThisBlogThis!Share to TwitterShare to FacebookShare to Pinterest