Starting things off, we will look at the Columbus Blue Jackets, who have been a season-long favourite in the #FailForNail campaign and have been in last place in the NHL since the puck dropped in October. They've been a big disappointment this season after making some offseason moves and spending lots of money to appear like an NHL team. Despite starting the month of March with 4 straight wins, the Blue Jackets are still considered a shoe-in for last place and have had lots of time to scout this years top picks for the 2012 NHL Entry Draft. Let's take a look at their tank data: 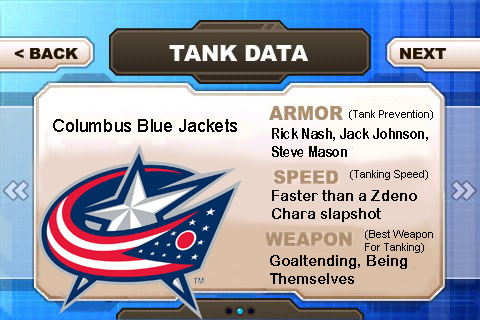 ARMOUR
What's helped the Blue Jackets string together a few wins lately has been goaltending. Steve Mason only allowed 5 goals in 4 games including posting his first shutout of the season. If Mason makes some saves, the team could get some points and catch the Edmonton Oilers for 29th overall. Newcomer Jack Johnson has been pretty solid since arriving in exchange for Jeff Carter with 4 points in 8 games and some strong defensive play. Captain Rick Nash has put the trade distraction behind him and is potting a few goals with 6 in his last 11. If those can generate offence the Blue Jackets might have a chance to crawl out of the basement, but only up the first step.
SPEED
The Blue Jackets have been tanking since the get-go and some stretches of their season have been downright depressing. They're 100% going to be in the Draft Lottery, and their chances at landing the first overall pick are looking good with 13 games remaining. Many were surprised to see the team put together a 4 game winning streak to start March, so it would be even more surprising if they pulled something like that off again. Columbus is at the bottom, and should stay there like they have all season.
WEAPON
Columbus' best weapon for tanking is to play like they have all season. A shitty powerplay, the worst penalty kill in the league, and struggling to score will help keep them where they are. But their best weapon is their goaltending. Steve Mason has been terrible all year, earning him the title of Sieve Mason, and Curtis Sanford has played well, but not good enough to steal games for the Blue Jackets. As long as the Jackets stay the course, they'll have an excellent chance to be #1 come June 26th.

In the Greatest Tank Battles of the 2011-12 NHL season, the Columbus Blue Jackets are looking like the overwhelming victor.
Posted by Dirty Dangle at 12:01 AM
Email ThisBlogThis!Share to TwitterShare to FacebookShare to Pinterest