After picking first overall in both the 2010 and 2011 NHL Entry Drafts, the Oilers will have another chance to get #1 this season as they are destined for the Draft Lottery and should lock down 29th overall in the NHL. If the Oilers were to land the #1 overall pick, they would become the 2nd NHL team to have 3 consecutive #1 picks, the first being the Quebec Nordiques who selected Mats Sundin (1989), Owen Nolan (1990), and Eric Lindros (1991). While landing top draft picks doesn't promise wins, the future does look bright in The City of Champions with Ryan Nugent-Hopkins, Taylor Hall, Magnus Paajarvi-Svensson, and Jordan Eberle expecting another young stud to join them for some entertaining hockey.

Let's take a look at their Tank Data: 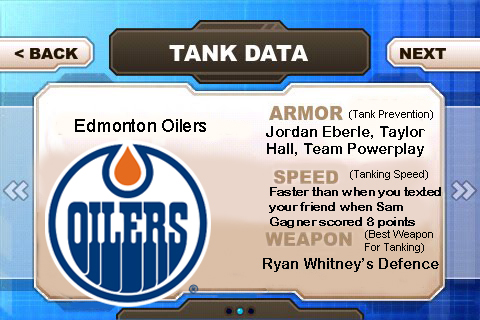 ARMOUR:
The Edmonton Oilers have the #1 ranked powerplay in the NHL thanks to Taylor Hall, Jordan Eberle, and Ryan Nugent-Hopkins who have combined for 61 powerplay points. While The Nuge has slowed, Hall and Eberle have been dynamic offensively and bring childish excitement to every Oilers game. It's crazy that the Oilers, despite being 29th overall in the NHL, are one of my favourite teams to watch as their speed and energy are so refreshing on the Hockey Night In Canada doubleheader following a Maple Leafs game. If Hall, Eberle and Oilers powerplay continue to click, they could crawl out of that 29th spot and catch the log jam from 23rd-28th.

SPEED:
Remember when the Oilers and Maple Leafs were among the league best in October? Well a lot has happened since then including 36 losses. While the Oilers have not been as awful as the Columbus Blue Jackets, they've still managed to fall well behind the pack and with 12 games remaining, they should be a lock for the Lottery and a 3rd summer of Oil Change.

WEAPON:
Ryan Whitney has just been awful when in the lineup. In his 39 games, the Oilers have 15 wins and Whitney is an atrocious -18. That's in 39 games. As long as Ryan Whitney continues giving away pucks like beads at Spring Break the Oilers will remain where they are and select a top pick come June.

In the Greatest Tank Battles, the Oilers are have been arguably the most exciting competitor this season, and another Lottery Pick finish will solidly them as Tank Experts when they take a top pick for the 3rd consecutive year.
Posted by Dirty Dangle at 12:38 AM
Email ThisBlogThis!Share to TwitterShare to FacebookShare to Pinterest