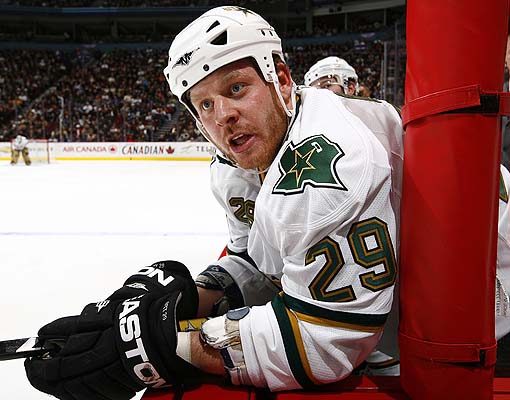 Anyone who has played the game of hockey knows all about the chirping that goes on from the bench and on the ice. There's been some memorable ones throughout hockey history such as Brad Richards "Fantasy Camp" and Bryan Trottier and Kevin Stevens ripping into Brian Bellows. It's part of the game, and you'll still find it during Sunday night beer leagues where verbal exchanges can get pretty heated.

To "The Bad Bucket/The All-Star"
In a league where mostly everyone is wearing cages (some guys gotta work the next day), this can be harder, but if the guy is wearing a Jofa helmet feel free to refer to it as a garbage can or a Swedish toilet. Also, anyone with a full helmet visor is fair game for chirps ranging in "Bubble Boy" to "Fishbowl" and asking this player if he needs his kids to wash it in the driveway on the weekends is a good way to get under their skin. In most leagues these days there will be a few guys that don't wear a visor or cage and skate around like they are playing pro. A good chirp for them is to tell them they are "still living the dream" or that their face is so far beyond repair that they shouldn't bother protecting it anymore. This will forsure get any ex-Junior A plug crossing checking you next time you are on the ice.

To "The Bum That Can't Skate"
It always seems like the guys that trip you into the boards or cross checks you in front of the net in a pickup game is usually the biggest plug on the ice. Commenting on his house league skating style is a great way to piss him off or comparing him to the skating style of former Maple Leaf Brian Curran is always a good start. You can let the chirps escalate to ankle burning by asking "How much tape did you use on your ankles today?" and letting the player know that he's the first person you've ever seen play an entire game on their ankles. If you want to get really nasty, let them know that they skate like Lieutenant Dan.

To "The Tommy Try Hard"
There is always that guy who tries so hard and back checks on you like it's Game 7 of the Stanley Cup Playoffs. This is great in competitive play, but playing some shinny hockey with buddies it gets a little old. Some useful chirps for this go-getter are "Easy Game Seven" and chanting "Rudy, Rudy, Rudy" as he skates up the ice. If this player does something like block a shot in a blowout game make sure to remind them that there's no scouts in the crowd.

To "The Show Off"
Everybody has played at different levels and sometimes there is that guy out there that is so much better than everyone else. He will dangle a bit, but for the most part these guys know they are a step up and will dish it off more often and not show off that much. These are the guys we all respect. But then you get the guy that feels the need to remind everybody on the ice that they are hacks and he is god with a stick. It's best to remind these players about their youth hockey with chirps such as "You must have played AA hockey as a kid" as this will piss off any guy that played AAA or Junior and don't forget to comment that perhaps his Daddy got him on his Minor Midget team with his wallet.

To "The Stats Guy"
Ever since the game of hockey began there was that guy trying to get the 2nd assist by skating up to the ref after a goal letting him know his jersey number. You know this is the same guy who e-mails the league office for stat corrections too. There are so many chirps for this guy, and he deserves them all. You can call him "Stat Tracker", "2nd Assist" or "Paul STATSny", but the easiest way to upset this guy is to inform him that there is no scoring title and noone will believe that a guy who can barely shoot can be a point-per-game player.

If all else fails, we guess you can make fun of their girlfriend/wife.... What's your favourite chirp?