How Do Players Perform Pre- and Post-Concussion? 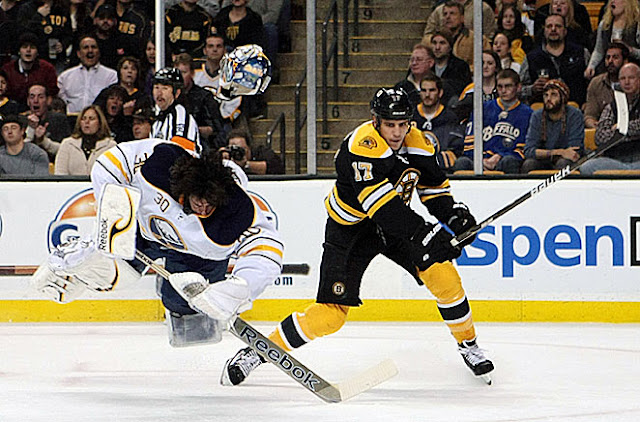 It's hard to expect a player to return to true form after suffering a concussion, especially after all the information we now know in surrounding the traumatic brain injury. We've seen players like Eric Lindros, Pat LaFontaine, Mike Richter, Keith Primeau, and Adam Deadmarsh leave the game of hockey before they had to because of concussions. Now a new generation of concussed players have their careers in jeopardy: Sidney Crosby, Chris Pronger, Marc Savard, and Ian Laperriere are all out with concussions and no timetable for return. Some call it an epidemic, some say they're just being reported more, but it's interesting to see how concussed players this season have performed since returning from their injury, and if NHL GM's might pay closer attention to a players concussion history if performance declines are evident.

Looking at some of the more profiled concussed NHLers this year, lets see how their performances stack up pre- and post-concussion:

Diagnosis: Giroux hasn't really missed a beat and continues to challenge Evgeni Malkin and Steven Stamkos for the Art Ross Trophy. Concussion was just a hurdle that he's obviously overcome, but boy did he give us on a scare on HBO 24/7 as he dealt with the injury.

Diagnosis: Started hot as he led the Hurricanes in scoring before suffering a concussion, but his production has decreased from 0.8 points/game to 0.57 points/game. While a concussion may have hindered his point production, more games will need to be played before determining the effects of the brain injury on his performance. One thing we wonder is that with a young player suffering such trauma Skinner may have lost a bit of edge on the ice and may be more timid to go into certain plays where he might have a scoring chance.

Diagnosis: While his goal scoring has tapered off, Michalek is still an offensive threat and has even improved his +/- by +9 since returning from his concussion. Looks like the concussion hasn't hurt his stats too much except in the goal column, but he's shooting just as much so maybe the sniper is simply cooling off.

Diagnosis: There's a visible drop off in point production following his concussion in early December. Richards started the season on pace for similar totals to last year, but now with 17 games left in the regular season he is on pace for 43 points which would be his lowest total since 2006-07. Richards is clearly struggling on a team that is having trouble scoring goals and suffering a concussion probably didn't help Richards as he only has 3 goals since the concussion, and 1 goal in his last 29 games. Perhaps he needs to talk his game over with BFF Jeff Carter over a pint or ten.

Diagnosis: His performance has definitely been affected with his point/game production decreasing in half, as well as his +/- performance taking a big hit by -8 in a short amount of time. As a Leaf fan, I've noticed a visible difference in Liles post-concussion, but it looks like he's starting to get his game back as he gets more games in.

Diagnosis: Letang was almost at a point-per-game pace before getting rocked by Max Pacioretty in late November, and while his pace did dip a little, he was still very solid for the Pens. While the concussion hasn't stopped his scoring, it did cloud his mind enough for him to forget to skate with his head up as he is once again sidelined with a concussion following a hit by Eric Nystrom.

Diagnosis: Big decrease in point production, however his goal production is still top notch. He's still shooting like a wildman, but his assist total has dropped off dramatically. Hard to tell if his passing is off, but Weber is still one of the more feared defenceman to play against so we'll chalk up his post-concussion play to his forwards not finishing.

Diagnosis: While Zidlicky started very slow, and hasn't been the powerplay specialist we've seen in past years, his production following a mid-November concussion is pretty bad. Despite logging heavy minutes on the powerplay, Zidlicky has only been able to muster 1 powerplay point since returning to action. Throw in he's a -9 since coming back and I'd be a little worried about the effects of that concussion. A change of scenery hasn't done Zidlicky any better either, as he's done nothing since being traded to New Jersey.

Diagnosis: While Reimer's pre-concussion stats are nothing too get excited about, they are substantially better than his post-concussion stats. Since his return in early December, Reimer has allowed 3 goals or more in 16 of the 22 games he's started. His save percentage is at a Vesa Toskalian level and every game he starts is now a battle for the starting job against Jonas Gustavsson. We think the concussion has messed him up a bit and Optimus Reim is in need of some repairs to his game.
Patient: Ryan Miller
Games Missed: 8

Diagnosis: Miller struggled early, and getting rocked by Milan Lucic did not help his game, but he's bounced back and has helped the Sabres crawl out of the basement of the Eastern Conference into the playoff hunt. While his stats have improved post-concussion, Miller has had some brutal games and some Buffalo faithful have even called for his exit. There is no denying he's not performing in the superstar form we are used to seeing, but it's too hard to say if the concussion he suffered has rattled his game.
So while only a few players have dropped off following their concussion, it looks like it does take them a few weeks or a month to get back into form. Remember these are only some of the more high-profile players, but there is no denying that they are very fortunate to have been able to return this season after suffering their concussions and for them to be performing any level is a great comeback.
Posted by Dirty Dangle at 12:14 AM
Email ThisBlogThis!Share to TwitterShare to FacebookShare to Pinterest