A Lottery Pick Can Save This Maple Leafs Season 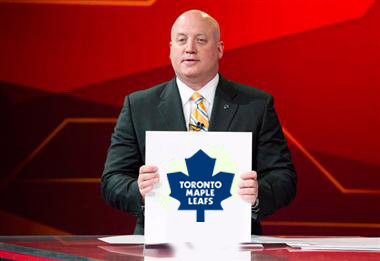 As the Toronto Maple Leafs approach seven years of not making the playoffs, you would think that they would have been able to score a top 3 pick at least once. Well, they did come pretty close two years ago with a 2nd overall draft pick. Unfortunately for Maple Leafs fans, they didn't have that pick as it had been traded to the Boston Bruins earlier that year.

This season there was a confident swagger to the Leafs. They started off hot and were one of the top teams in the Eastern Conference, they even managed to lead the league in points in early November. They managed to stay in a playoff spot for most of the year until recently slipping to 11th in the East and 5 points out of the playoffs. Their goaltending has been horrendous and their February Freefall has been well documented in the hockey world.

Leafs fans have gone through the stages of grief and are now in the acceptance stage meaning meaning there is some hope for this piece of shit team: The Lottery Pick. The Leafs are just 4 points up on the 26th and 27th place teams. All the Leafs have to do is get into the bottom 5 in the league and they have a chance for the 1st overall pick. With the way both goaltenders are playing this shouldn't be that hard to accomplish and I am all up for the #FailForNail or #BailForMikHail campaign in Toronto, but you know the Leafs will find a way to make a playoff push and finish 10th.

Here are some of the Top Prospects to get excited for at the 2012 Draft:

Nail Yakupov - has been called a mini-Ovechkin, and his name is Nail
Mikhail Grigorenko - great size and skill could make for a dominant NHLer
Ryan Murray - top ranked d-man could bring consistency to any NHL teams blueline
Filip Forsberg - could be a solid power forward in the NHL, also has the last name Forsberg
Mathew Dumba - TSN compares him to PK Subban, is that racist?
Jacob Trouba - big American defenceman, makes Brian Burke salivate
Alex Galchenyuk - the Draft Wildcard has sat out this year with a torn ACL
Morgan Rielly - great skating d-man, but is also sidelined with a knee injury
Griffen Reinhart - been compared to Dougie Hamilton, the missing piece of the Phil Kessel deal
Radek Faksa - a Czech power forward that can find the net, not bad

Where do you think the Leafs will finish this year and what type of player should they be looking at drafting?
Posted by Dirty Dangle at 3:28 PM
Email ThisBlogThis!Share to TwitterShare to FacebookShare to Pinterest