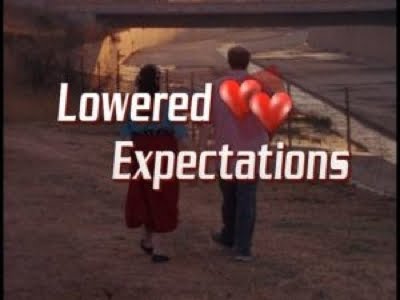 Looking at the NHL standings there are definitely a few surprises sitting in playoff positions or at least competing for one that nobody expected to see when making their season predictions at the beginning of the year. Like most people, you've probably lost that piece of paper you wrote all your predictions down on, or purposely misplaced it when you saw the Bruins in last place after one month. Well it's a good thing that most of my predictions lined up with the Puck Daddy Prognosticators and I can find the Bodog Stanley Cup odds from October 6th, 2011 so we can see that some of the teams with Lowered Expectations are actually performing pretty damn well this year. 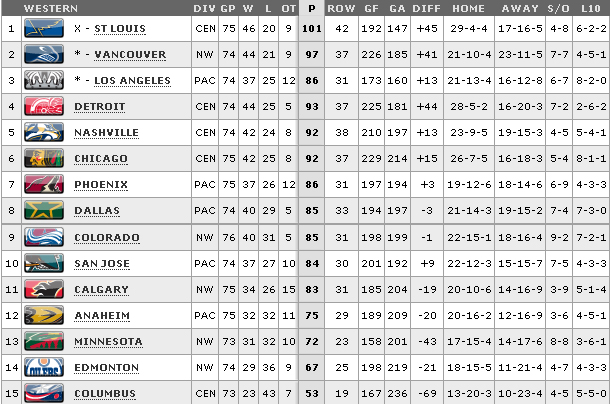 Most people had the Blues as maybe squeaking into the playoffs, and Bodog had them at 30/1 odds to win the Stanley Cup. Well, they're now leading the NHL in points, and are 8 points up on their Central Division rivals. They're young, they have the best goaltending in the league, and their depth is among the best in the NHL. Despite injuries to Alex Steen, David Perron and Andy MacDonald for major chunks of the season, the Blues have found themselves on top of the NHL, and deservingly by competing in arguably the toughest division in hockey.

Nobody on the Puck Daddy staff thought the Stars would make the playoffs. Bodog had them at 40/1 odds for the Cup. We sure didn't see them competing for the Pacific Division lead this late in the season, but there they are, hanging in there. Kari Lehtonen has been stellar in net when healthy, and the Stars' sleuth of underrated players - Loui Eriksson, Michael Ryder, Jamie Benn - have been very solid. Throw in Sheldon Souray being a decent NHL defenceman again and you have a team that could surprise many going into the playoffs.

Many had the Avs as a bottom feeder in the Northwest Division, and Bodog had them at 65/1 odds for the Cup. Despite injuries to last year's team leading scorer, Matt Duchene, the Avalanche have stepped it up thanks to Calder candidate, Gabriel Landeskog, and solid goaltending from Seymon Varlamov and veteran backup, Jean-Sebastien Giguere. While not a lock for the playoffs, they have definitely performed better than expected and will have many cheering for them as an underdog to squeeze in to the postseason.

The 'Yotes, like the Stars, were never favoured to do well this season. For a team that didn't even know if they'd be returning to Phoenix the following season, expectations were very low. Nobody expected them to make the playoffs without Ilya Bryzgalov who was believed to be the only reason they had competed before, and Bodog saw them as 35/1 odds for the big trophy. Well, 39-year-old Ray Whitney has been incredible this season leading the team with 70 points, and Radim Vrbata has emerged into that goal-scorer everyone hoped he would be 5 years ago by scoring 30 goals for the first time in his career. Perhaps their biggest asset is Mike Smith who actually has more wins and better numbers than Bryzgalov at only $2M a season. The good thing for the 'Yotes is that somebody has to win the Pacific Division and some solid play down the stretch could give them home ice advantage for their 12,000 fans.

Few expected the Flames to be this close to a playoff spot, an Bodog gave them 40/1 odds to go all the way, but here they are with 3 weeks left and only 2 points out of a playoff spot. Thanks to Iggy being Iggy and scoring his guaranteed 30 goals/season, and the duo of Olli Jokinen and Alex Tanguay contributing some offence, the Flames could make the playoffs for the first time since 2009. They will need to lean on Kiprusoff down the stretch to steal some points for them and stop losing in the overtime/shootout as that logjam in the West to get into the playoffs will likely come down to the regulation or overtime win tiebreaker.

Now, on to the Eastern Conference: 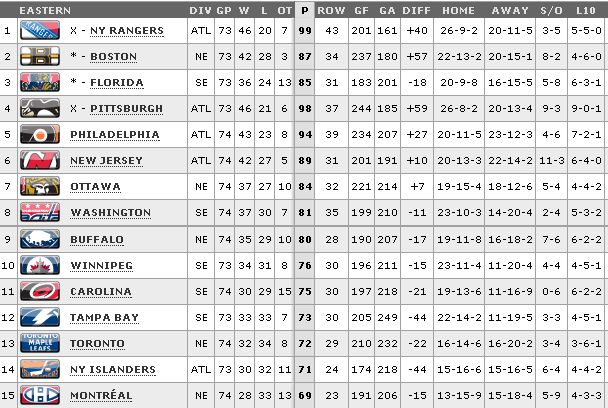 When Dale Tallon threw together his rag-tag group of players during the offseason to get above the capfloor we laughed at those contracts. While some of his contracts are still laughable  (Jovanovski, Upshall, Bergenheim), the team has risen to the top of the distinguished Southeast Division and could be looking at their first trip to the post-season since 2000. Nobody pegged them to make the playoffs, yet alone lead the division, and Bodog gave them the 2nd worst odds of any NHL team at 75/1 to win the Stanley Cup. Guys like Jose Theodore, Brian Campbell, Tomas Fleischmann, Stephen Weiss, Kris Versteeg, and Jason Garrison have led the way and are proving the Panthers aren't messing around this year. While there are no points for losing in OT during the playoffs, the Panthers could make some noise as an underdog.

Predicted by most to finish near the bottom of the Atlantic Division... oh shit, they will, but they still have 89 points which puts them at #6 in the Eastern Conference and destined for the playoffs. With 30/1 odds, the Devils were not expected to be a powerhouse team this year, but have delivered with their Big 3 in Kovalchuk, Parise and Elias delivering offensively and surprise offensive mini-machines David Clarkson (28 goals!?!) and Adam Henrique contributing as well. While the days of Marty Brodeur being Marty Brodeur may be gone, he can still win games and has done just that with Johan Hedberg performing admirably when needed. The Devils may not have been expected to reach  the postseason, but they will so get your facepaint out.

The Puck Daddy Prognosticators all thought the Sens were going to be basement dwellers. Bodog gave their Stanley Cup hopes 70/1 odds. After finishing at the bottom of the Northeast and having a laughable goalie duo to start the season, the Sens deserved these low expectations. Well, everyone was wrong, even Sens fans, who had hopes of a chance at Nail Yakupov this year. But when Jason Spezza and Milan Michalek have their best seasons in years, and Erik Karlsson has a 23-point lead on all other defencemen, you're going to succeed. Throw in the fact that Craig Anderson has been solid between the pipes and Daniel Alfredsson's back has held up and you could be looking at a team that might upset a division winner come April (probably Florida).

The Atlanta Thrashers in disguise were given very low odds of 60/1 to win the Cup, and most saw them as a Lottery Team this year, but the Jets are pushing for the playoffs with their loud fans right behind them. Most expected the Jets to be a nice story this year with the city of Winnipeg getting an NHL team back and while they would enjoy the fresh start, they probably shouldn't get their hopes up about winning many games. Well, with one of the better home records in the NHL and a deafening crowd, the Jets have battled into the playoff race and sit only a few points out with some key divisional games remaining. The franchise has only made the playoffs once, and failed to win a game, but these Jets have flown above expectations and could make some noise in April if they qualify.

While not every team with low expectations have achieved success (Columbus, Oilers, Toronto, Islanders, Wild), these teams have outdone themselves and will hope to find some love come playoff time.

Posted by Dirty Dangle at 1:34 AM
Email ThisBlogThis!Share to TwitterShare to FacebookShare to Pinterest