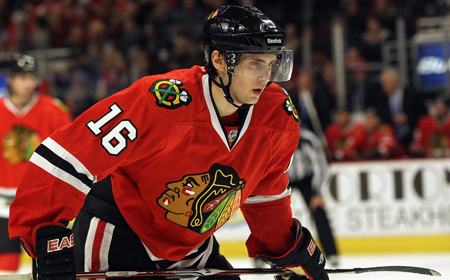 Some people like chugging Molson Black label and getting buzzed from a few sips, which is a common trend among todays youth in parks and ravines on Friday nights after shoulder tapping in a Beer Store parking lot. Others like a lighter beer that gets you to your goal of being drunk, but just takes a bit longer. In the NHL right now, Marcus Kruger is looking like the light version of Jonathan Toews.

Perhaps you haven't heard of Marcus Kruger? Well he is a name you should remember and follow closely because he is having a very solid rookie campaign with the Chicago Blackhawks and if I know my prospects, he could become one of the better two way centres in the game. While he may not have the flashy stats of Ryan Nugent-Hopkins or Adam Henrique, Kruger is playing big minutes for the Hawks as they fight to stay in the playoffs.

The 21-year-old Swede was drafted in the 5th round of the 2009 NHL Entry Draft and is looking like a Detroit Red Wings-drafting-Pavel-Datsyuk-steal. While beginning the season averaging around 10 minutes a game, through injuries and strong play he now averaging just under 15 minutes a game and sometimes sees up to 19 minutes a game. He kills penalties and gets powerplay minutes, and has played everywhere from a 4th line role to a 1st line centre when injuries have piled up. He truly works all three zones of the ice.

He might not be lighting up the scoreboard just yet with 8 goals and 19 points in 58 games, but his hockey sense and his great two-way play has garnered a lot of praise and ice time from head coach, Joel Quenneville. At 6'0" and 181 pounds, Kruger will have to hit the weights and put on more muscle if he wants to be more successful in the NHL as he has the skill set to be a top 6 player. After suffering a concussion earlier in the year and missing 8 games, perhaps hitting the gym and getting stronger will be on Marcus Kruger's to-do list this summer as most of the videos of him on YouTube involve him getting rocked.

I am not saying that Marcus Kruger will be anywhere near as good as Captain, All-Star, Stanley Cup Champion, Gold Medal Olympian, and hockey camp instructor, Jonathan Toews, but he displays the same great hockey awareness and should end up being a 20 goal-50 point guy that is great in his own end - and what coach doesn't want that on their team?

Posted by Dirty Dangle at 12:32 AM
Email ThisBlogThis!Share to TwitterShare to FacebookShare to Pinterest