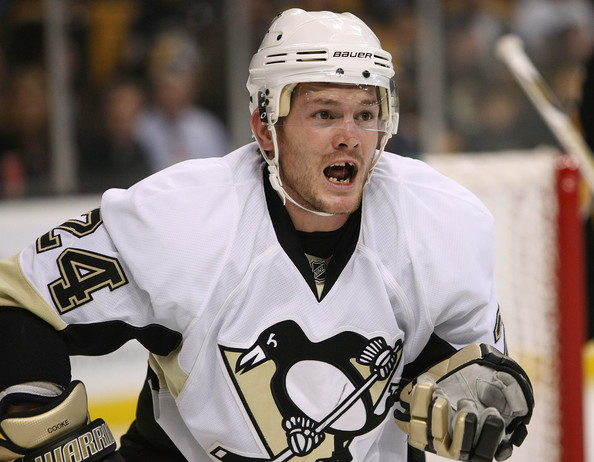 You rarely hear about the success rates of criminals returning from prison who go on to lead meaningful lives in their communities without re-offending. It's a story that evades headlines whereas recidivists make front page news when they re-offend and spark controversy about justice failing the public. The sentencing principles in criminal justice are no different than the NHL's in my mind - denunciation, deterrence, separation of offenders, rehabilitation, reparation and promotion of responsibility - and Matt Cooke has been a shining example of how suspensions in the NHL should be carried out. It should not only be the NHL's responsibility, but the team of the offending player should shoulder some responsibility for educating and rehabilitating the player. Through his success on the ice this year and transformation as a player, Matt Cooke has earned him the well-deserved Pittsburgh Penguins nomination for the Bill Masterton Memorial Trophy by the local media and how this came to be needs to be examined.
Normally the Masterton goes to the player who exhibits "qualities of perseverance, sportsmanship, and dedication to hockey" and is usually awarded to a player overcoming an injury or illness that could have ended their careers, but managed to work their way back on the ice. You think of Jose Theodore losing his son, but putting up career numbers, or Mario Lemieux winning the scoring title and leading the Penguins to the President's Trophy after battling Hodgkin's Lymphoma. And now you might see Matt Cooke's name among these names for overcoming being a douchebag and shitty teammate to being a safe, productive team player in the sport of hockey.
Cooke's pest level peaked last season when he was suspended for 10 regular season games and the first round of the playoffs for an elbow to the head of Ryan McDonagh. It was the longest in his career, and was a real game-changer for him. With the Pens already down Sidney Crosby and Evgeni Malkin with injuries, they would fall short in the first round against the Tampa Bay Lightning in a do-or-die first round. A healthy Cooke would watch 17 games from the pressbox feeling helpless and responsible for their collapse. Well it's a stretch to say he could have turned the tide of the series, Cooke put his teammates down an NHL regular in the most intense part of the NHL season and knew he had to change his game or risk not being in the game much longer.
Perhaps my favourite part of Cooke's suspension last season was that he accepted responsibility for the hit despite claiming to not intentionally hit McDonagh in the head. Usually you get players saying they disagree with a suspension, but will respect the decision, but rarely do you see players accept full responsibility. It was refreshing, and for a player like Cooke, who had been suspended 3 previous times and managed to escape a severe punishment for his hit on Marc Savard because the language of NHL rules, it was a big step in his rehabilitation. With the Penguins supporting the suspension, Cooke's transformation was about to begin.
Michael Farber of Sports Illustrated wrote that Dan Bylsma spent 30 hours reviewing hits with Matt Cooke in preparation for the 2nd round had the Pens made it passed Tampa Bay. You don't often hear of teams publicly supporting a suspension, or head coaches reviewing over a days worth of hits and dangerous plays with the suspended player, but this is why the Pittsburgh Penguins are such a great organization. It's easy to stay quiet on the subject or even dump the player, but the Penguins have turned Matt Cooke into a key-player for their team. With a career high 16 goals including 4 game winners, Cooke only has 30 PIM this season despite throwing 135 hits and has more points (31) than PIMs for the first time in his career.
For a pest with a proficiency to target the heads of opposing players, this is a drastic change in style of play. Of his 15 minors this season, he has no elbowing, charging, checking from behind, cross checking, hit to the head and appears to only receive the minor penalties that most players receive (roughing, tripping, interference). While he has a long way to go to becoming one of the cleanest players in the NHL, his game has changed for the betterment of hockey, and his transition should be studied and used to promote safety in hockey.
Cooke's story is proof that we can get those dirty hits and headshots out of our game, as long as teams are willing to put forth the effort to educate their players like the Penguins have. This could be accomplished by creating an incentive for teams to promote safe hits and plays by donating money to team charities if their team finishes the season without any suspensions or game ejections for dirty hits. Or, the NHL can punish teams with fines to the organization if a player is suspended thus putting more responsibility on teams to educate their players and work with them to promote safe play or pay for it financially. The Pittsburgh Penguins have stepped up and taken responsibly for cleaning up our game with Matt Cooke being an example of safety success, and it's time other NHL teams and the league did so as well.
Posted by Dirty Dangle at 12:08 AM
Email ThisBlogThis!Share to TwitterShare to FacebookShare to Pinterest