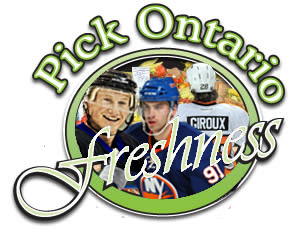 "Good things groooooow, in Ontarioooooooo"
Foodland Ontario might promote the shit out of their Ontario produce, but that message isn't being heard in Toronto these days. On the most recent Coaches Corner, Don Cherry ripped into Brian Burke for not having a single Ontario-native on the current Maple Leafs roster. Cherry was fired up as during the Hockey Night In Canada pre-game show, Brian Burke had said in an interview with Ron MacLean that the team often faces adversity in playing teams with lots of Ontario players who try their hardest in front of friends and family in attendance. So why wouldn't you get Ontario-born players to do the same for your team?

When you look up and down the Maple Leafs current roster, you will notice that Don Cherry is right - there are no players from Ontario. Nazem Kadri who has played in 19 games this season for the Leafs is the lone Ontarian to play for the club this year. In the past few years, the Leafs have had Ontario-born players such as Tim Brent, Mike Zigomanis, John Mitchell, Matt Stajan, Jamal Mayers, Luca Caputi, Wayne Primeau, Dominic Moore, Carlo Colaiacovo, Boyd Devereaux, and Mike Van Ryn play for the team. Not the most quality NHLers, but landing big fish like Stamkos, Tavares and Seguin requires finishing in the lottery (and keeping your draft picks).

So far in this 2011-12 NHL season, 504 Canadian players have played in an NHL game, or 53.5% of the total players. Of those 504 Canadians, 199 or 39.8% have come from Ontario. It's a little surprising that the Leafs don't have a single Ontario native on their current roster despite the fact there are a lot of them in the NHL, but we're pretty sure Brian Burke isn't discriminatory to Ontarians. In fact, he has 9 Ontario-born players playing for the Toronto Marlies, and have had 14 total Ontario-born players lace them up in the AHL this season.

Burke has said he doesn't care about where a player was born and that he looks at how the player competes and what they bring to the table. But it's pretty clear he has a thing for players with an American passport. Yes, being American and having the experience of scouting American players for the Olympics and World Championships does give Burke an inside track on how those Yankee players perform. It is still very strange that the Leafs are neglecting their own backyard where some of the best hockey players in the world come from, but at least they do have some Ontario-born players in the system developing.

One theory is that GM Brian Burke realizes how much pressure there is to play in Toronto and that a hometown player might not handle the pressure very well. I could see playing in Toronto as a hometown boy being a lot to handle, but NHL players are going to get that wherever they are from. Call it a coincidence that the Leafs don't have any Ontario-born players on their roster, but they are still one of the more North American-filled teams out there with 18 of 22 players coming from Canada and the USA. Sure good things grow in Ontario, but the rest of the country and continent are just as fertile.