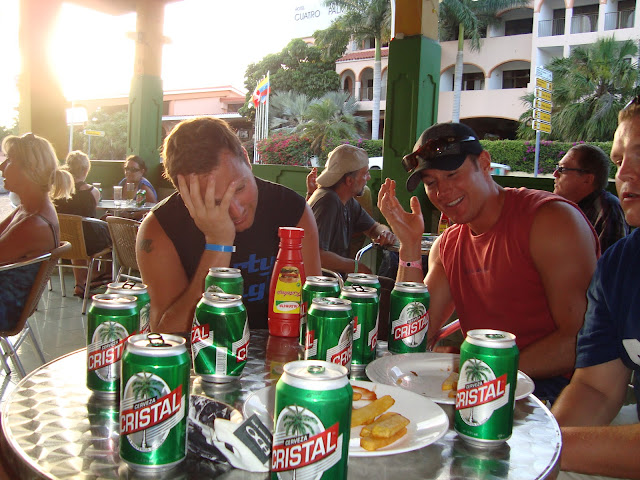 Yesterday I returned from Cuba where I took off for a week to learn Spanish at the pool bar. While it's always a great time, a little bit of me dies inside not being able to follow the NHL for an entire week as I normally would. I've only ever bought internet time on vacation once, and that was to check who won Game Six of the 2009 Stanley Cup Finals and whether I would be able to watch Game Seven when I got home - I did, and it was glorious. Anyways, I didn't check anything this time around and came back to a few surprises around the NHL. I also tossed in some hockey observations I noticed around the resort.

Sidney Crosby came back... and of course I had him on the IR for my fantasy team...
Sid the Kid came back and showed once again that he doesn't rust, even if he doesn't play for months. With 9 apples and a +7 rating through 4 games I'm going to be pissed if I lose my league by 9 assists or that +/- rating. Welcome back Sid.

Gabriel Landeskog has been declared the Calder Trophy winner...
The Avs picked up 7 of 8 points while I was away and found themselves in a playoff position. From what I read, Gabriel Landeskog was a major part in this and has been declared the Calder Trophy winner by pretty much everyone. With 3 goals including 2 game winners this week, he now leads all rookies in goals (21) and points (47). Sign me up for some Landeskoging.

Ilya Bryzgalov found his way out of the woods...
This March, Brygalov has an 8-0-1 record and 4 shutouts. While I was gone, he posted a 3-0-1 record, 1.44 GAA and .950 save percentage including a 38 save performance against the healthy Pittsburgh Penguins on national TV. This makes the Flyers a scary team entering the playoffs if their goaltender can play like Flash! A-ah! Saviour of the Universe!

Alexander Radulov is returning to the NHL after 4 years abroad
The Nashville Predators who are already a strong team, just got Alex Radulov back? Arguably the top player in the KHL the past 4 years and the all-time leading KHL scorer, Radulov is going to make the Preds serious contenders come playoff time if he can find the net like he has overseas. While I'm well aware of how he is allowed back in the NHL, it's still pretty messed up that he can just wander back over here and join a team for the playoff push.

Mikhail Grabovski fought Chris Neil?
While checking the boxscores of the Leafs game, I could help but notice Grabovski earned 25 PIMs on Saturday night thanks to a fight with Chris Neil in which he didn't have his jersey tied down. Talk about a mismatch on paper, but from the video I saw, Grabo held is own. The Leafs really need to get tougher guys so their highest paid forward doesn't have to drop the mitts, although Grabo looks semi-tough with that biker tat on his arm.