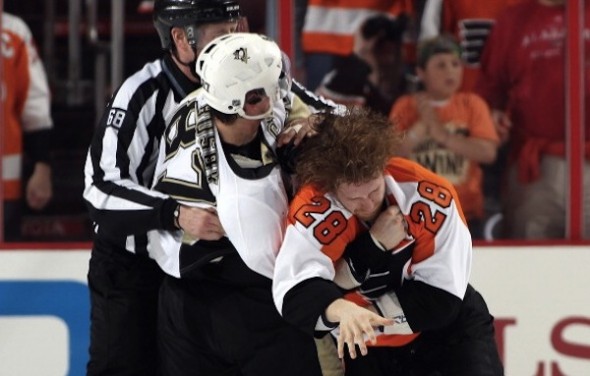 All I've read about the past few days is how the playoffs have been dirty and have given the game of hockey a black eye. Well I think those writers have never had a black eye.

To those mainstream writers who never played the game of hockey, but read comic books on the playground while other kids played contact boot hockey or british bulldog, I say to you: please stop pretending you know what's best for the game. Sure you need a flashy headline to get people to read your bullshit, but trashing the game of hockey isn't going to get you many true hockey fans reading your articles.

Please stop writing about how the fighting and aggressive play during these playoffs are making the sport look bad - that is how playoff hockey is defined. Every game is a battle, and if you come out of the playoffs unharmed, there is a good chance you didn't win. I remember an interview from Wayne Gretzky discussing the Edmonton Oilers first trip to the Stanley Cup Finals. The Oilers were a great team and had won the league by 15 points in the regular season, but they were swept in the finals by the New York Islanders. Gretzky would note while leaving the rink after the 4th loss they saw that the Islanders were covered in ice packs and bruised all over, while the Oilers were fine. He then knew what it would take to win the Stanley Cup.

So far this first round has been amazing hockey with high scoring games and a lot of skill shown, but also hard fought games. All the water cooler talk I've heard as been about how great these games have been and how all the players seem to be playing with such passion on the ice that they are many are doing things out of character like blocking shots and throwing hits. Even the NHL's slogan this post-season is "Because It's The Cup" and have advertisements that demonstrate the extra lengths fans and players go for their teams. Take two of the top players in the world, Sidney Crosby and Claude Giroux, dropping the gloves to fight - because it's the Cup.

Call me oldschool, I guess I enjoy this rugged tough style of hockey. That is the way I grew up playing the game as a kid. Hockey is a violent game and when you step on the ice you should be prepared for anything and expect some aggression directed your way. Sure players have crossed the line (Raffi Torres, Aaron Asham), but these hits have been happening all season long and with the pressure and emotion of the playoffs, they're not going to stop. The scrums and fights following these hits that appal some members of the media are teammates sticking up for teammates and are intensified during the playoffs when brotherhood is at its highest.

It's the passion the players are showing this year that has made these playoffs so intriguing. If you aren't winning the battle on the scoreboard, you better win a physical battle on the ice to send a message that you won't back down.

-Mad Mike (not really though)
Posted by Dirty Dangle at 1:14 AM
Email ThisBlogThis!Share to TwitterShare to FacebookShare to Pinterest