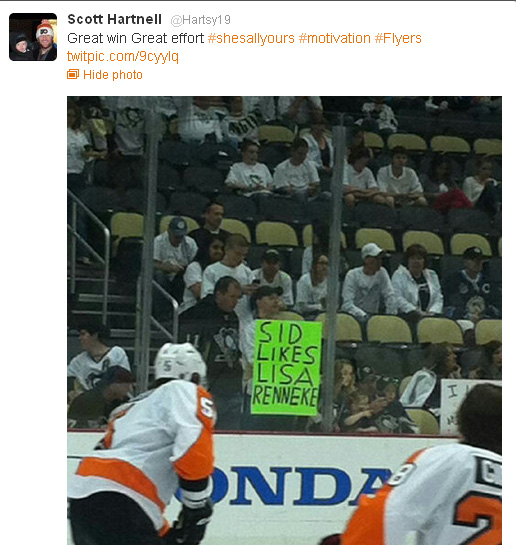 Scott Hartnell had some extra motivation to win the series against the Penguins after this sign showed up in Game 5 at Pittsburgh. For those unfamiliar with Lisa Renneke, she is the ex-wife of the power forward and was rumoured to have slept with former Flyer, Jeff Carter. While both publicly denied the affair, the divorce sounded brutal and Hartnell had a big decline in offence with the personal distraction dragging throughout the season. Well flashforward two years and Hartnell had a career season with 37 goals and 67 points with Renneke behind him, and Jeff Carter on another team (and maybe behind Renneke).

With no off-ice distractions and everything going right for Hartnell on a line with Claude Giroux and Jaromir Jagr, he could be a major factor for the Flyers postseason hopes and continue to have the last laugh on matters regarding his personal life as he's developed into one of the NHL's most popular characters. It might be the hair and beard combination, or the fact that he falls down a lot, but everybody seems to love Scott Hartnell (Dion Phaneuf may be the exception).

With a solid mix of rookies, veterans and role players, the Flyers are now one of the top Stanley Cup contenders with Pittsburgh and Vancouver out, and will rest for a few days as they await their round two opponent. The Flyers are a scary team and we can only hope that Hartnell keeps taking to Twitter and interacting with fans while chirping his ex in the process.

Posted by Dirty Dangle at 2:09 AM
Email ThisBlogThis!Share to TwitterShare to FacebookShare to Pinterest