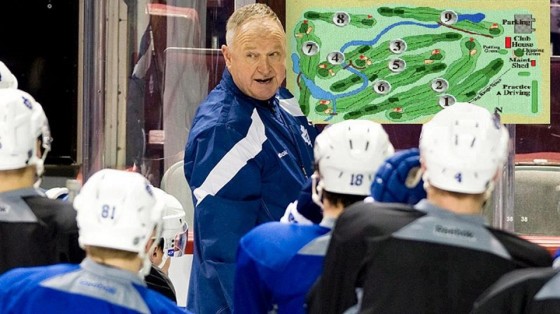 What a rollercoaster season it was for the Toronto Maple Leafs, and as our hometown team, we're going to do a quick little season review for them looking at The Good, The Bad, and The Ugly from the past season.

Kessel was a point a game player with 82 points in 82 games. He helped many people forget about what the Leafs gave up to get him and he was one of the best players in the league the first few months of the season. Leaf fans should be expecting 35+ goals every year. Lupul surprised many by keeping pace with Kessel, and managed to hold down a point-per-game pace with 67 points in 66 games before separating his shoulder in early March and missing the rest of the season. The duo was a definite highlight for Leafs fans this year.

Gardiner showed flashes of greatness this year and had the most points for a rookie d-man in the league with 30 points in 75 games. He was only a -2 on the year, which is very respectable on a team that was 2nd in the league for goals against. Gardiner's composure and skill were nice to see on the Leafs blueline and the future looks promising for the kid as long as he avoids the sophomore slump.

The Leafs Have A Top Pick

Somehow how Brian Burke hasn't traded the Leafs 2012 1st rounder for an American player...yet. While it's a product of a brutal season, the Leafs will be drafting no later than 6th overall this year and gaining a top prospect (hopefully).

To our knowledge, no waffles were thrown on the ice. Meaning the Air Canada Centre security can better spot boxes of Eggos hiding in pants or the fans decided to get more vocal to show their displeasure. Hey it worked!

Connoly made $5.5M this season and was able to remain pretty healthy for Tim Connolly standards and only miss 12 games. In 70 games he was only able to manage 36 points. Brought in to be the #1 centre, he wasn't able to beat out Tyler Bozak for that spot and found himself on the 3rd line for the most part... with his $4.75M cap hit.

Kulemin scored 30 goals last year as "The Quiet Sniper" and was starting to look like top line talent, but he took a huge step back this year and only scored 7 goals in the 70 games that he played in. The only good from this is that he is a RFA this summer and should be taking a pay cut after a steep drop off in production. Here's hoping he gets his mojo back next year as he is an exciting player to watch when he has the confidence.

Such a great guy off the ice and a funny personality. You have to feel for the guy who seems to have lost his game and was getting scratched even when he was healthy. Armstrong is like a broken down carnival ride and will make $3M next season. It's hard to see him as part of the Leafs future making that much money to sit in the pressbox.

James Reimer did not look like Optimus Reim after taking a bump to the head early in the season, and even more noticeable was that of John Michael Liles. Well Reimer's numbers following his concussion are pretty obvious, Liles are a bigger concern as he put a -15 rating and saw his point production drop in half. Here's hoping they shake those cobwebs and can return to a higher level next season.

Yes you can also blame the defence for all their giveaways and horrible coverage in front of the net, but both James Remier and Jonas Gustavsson didn't play well enough consistently to win some games for the Leafs. Both goalies were near the bottom of the league in both GAA and save percentage. Not many fans will forget that New Jersey Devils overtime winner on Jonas Gustavsson anytime soon.

The soft speedy forward was able to play in 62 games this year after missing a year with a concussion, but maybe he should have sat more games out. Lombardi had a team worst -19 on the year and had just 18 points. While he showed flashes of speed, Lombardi didn't look anything like he did before his new contract in 2010.

The Leafs finished the season with the 3rd worst PK in the league with 77.3% and finished in the bottom five in the NHL for the sixth consecutive season. Many will talk about how well they killed off penalties to open the new year, but the fact that had such a good streak going and still managed to stay in the bottom of the league tells you how poorly it was run to begin the season. PK consistency is needed if the Leafs want to avoid falling behind in games and losing valuable points.

The Leafs Shit The Bed

Plain and simple, the Leafs shit the bed. Think about the last time the Leafs made the playoffs and how different your life was, it's been a long (depressing) time. The Leafs gave so much hope early on and held onto a playoff spot, but what the hell caused them to tailspin out of control and drop to the Lottery? Unless there is a major overhaul with this roster does anyone really see this team getting that much better to getting in the playoffs anytime soon?

Here's a nice recap video that captures the highs and lows of the 2011-12 Maple Leafs season: