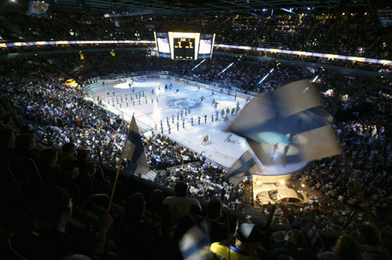 The 2012 World Hockey Championships get underway tomorrow which means you can watch hockey in the afternoon and then playoff hockey at night. While the tournament doesn't usually receive much love, there are some great players participating this year that you might want to keep an eye on. Some you may want to watch because they're just that good, while others will be looking to finish this year strong before entering the NHL next year.

Here are 10 players to keep an eye out for:

After a career year and finishing tied for 7th in NHL scoring, John Tavares will be auditioning for the 2014 Olympic team this year (and most likely next year, sorry Islanders fans). This is JT's 6th consecutive year representing Team Canada dating back to his debut at the U18's. Last year he led the team in scoring, and was among the top scorers with 9 points in 7 games.

His ridiculous contract with the Blackhawks is up meaning he will become a UFA if he chooses to return to the NHL after being loaned to HC Fribourg-Gotteron SA of the Swiss National League A. Huet had a decent season this year with 2.12 GAA and .920 SV% and helped his team make it to the league semifinals. He'll no doubt face a lot of rubber this tournament and if he stops enough of them there are more than a few teams looking for a goaltender this NHL offseason.

After recently deciding to stay in the KHL another two years because of alleged threats he'd be left off the Sochi 2014 roster, this could be one of the last few looks North American hockey fans get at him before the Olympics as he continues his career in the dark and scary Kontinental Hockey League. Kuznetsov is only getting better every year and shone at this year's World Juniors with 6 goals and 7 assists to lead the tournament in scoring. A big portion of those points game in a 9-point performance against Latvia, and helped him take home Top Forward and  Tournament MVP.

This is the third time Dion will be playing in the World Championships and if he stays with the Maple Leafs there is a good chance he will be playing every year. Every time Phaneuf wears the Red and White it seems he causes another player to choke on their tongue. Is this the year Dion finally kills someone?

The best player in the NHL this year should be the best player at this tournament. With even more open ice, Malkin should be lighting up this tournament and getting Team Russia into the medal rounds no problem. Malkin usually performs well at these tournaments 35 goals and 84 points in 71 international games for Russia, and with him at the top of his game, it's hard to see him doing any different this year.

After a spectacular season in which Karlsson dominated the defensive scoring race, Karlsson is now going to have even more ice to work his magic. Look for stretch passes all day from Karlsson as he helps lead a very strong Swedish defence core behind a very talented forward group that features Henrik Zetterberg, Gabriel Landeskog, Loui Eriksson and Johan Franzen. With this offensive gem quarterbacking the powerplay the Swedes are contenders to medal.

Eberle is a Team Canada World Junior legend with his clutch goals and after a 76 point season with the Edmonton Oilers this year he could have a big impact at the senior level as his play is only getting stronger. While this is his third World Championships, Eberle will be looking to top his previous tournaments (1-3-4 in 2010, 4-0-4 in 2011) and help Canada advance past the quarterfinals for the first time since 2009. Keep an eye on him to put up some big goals.

He has such a great name, but hasn't been that great of a 5th overall draft pick. He had dismal season with the Islanders, but maybe playing for his home country will light a fight under his ass. Niederreiter has played some of his best hockey wearing the Swiss jersey and was among the leading scorers at the 2010 World Juniors. If El Nino can become the offensive pest he was at that tournament then Isles fan may be a little more optimistic about their 2010 first round pick.

Alfie's career is winding down and this could very well be his last taste of competitive hockey. He already has 2 silver and 2 bronze medals at the World Championships so a gold medal will be a nice send off on a great career. Will Swedish fans chant his name at the 11 minute mark like Senators fans have been doing this year?

Remember his trick lacrosse style goal last year at the tournament? We sure do. Granlund has has great international success at the junior level, and his 9 points last year at this tournaments also turned some heads. He's got great vision and playmaking abilities which should be previewed this tournament for when he looks to join the Minnesota Wild next year. While only 20 years old, Granlund will be depended on to help defend the Gold Medal on home ice, which we can only hope for because Finland knows how to party judging by Pasi Nurminen's plane exit last spring.