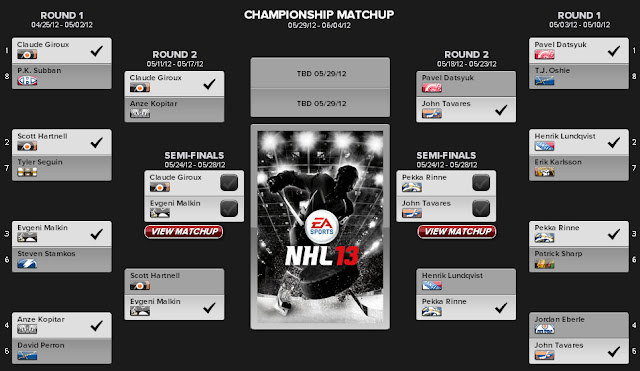 EA Sports is doing something a little different this year in revealing the cover athlete for NHL 13. In past years, they simply chose an athlete themselves and made some sort of announcement around this time of year. Last year, they built up anticipation by announcing Steven Stamkos as the cover athlete at the NHL Awards which was pretty anti-climatic. Well this year, they're letting fans vote through a bracket and it's now down to the final four: Evgeni Malkin, Claude Giroux, Pekka Rinne and John Tavares. All worthy cover athletes, although we're a little surprised Rinne got voted in over Lundqvist (didn't know Preds fans were so diehard they'd stuff an online ballot).

As always, many fans design their own NHL 13 covers and some of them actually look legit. Well, we like our covers to be a little more alternative and really show the players personality. Here are some of our alternative NHL 13 covers: 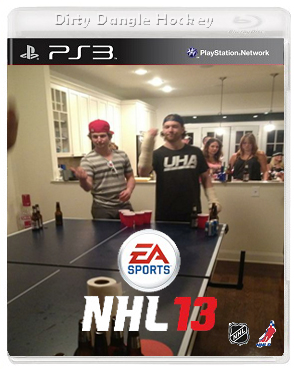 Claude Giroux was not only a standout this season with his offensive production in both the regular season and playoffs, but on the beer pong table as well. Rumour has it he's rocking a .850 shooting percentage this offseason - and this is all playing with two casts on his wrist. Who wins in a full beer chug? Patrick Kane, Claude Giroux, Mike Richards or Jeff Carter? 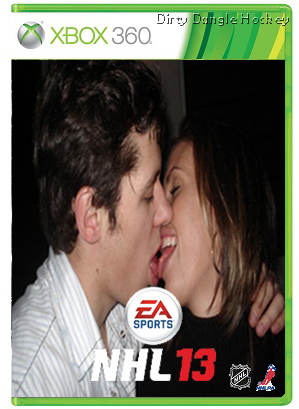 Evgeni Malkin became the first guy since Wayne Gretzky to lead both the NHL regular season and the IIHF World Hockey Championships in scoring in the same year. He was a dominant force on the ice this year, but off the ice he's also got some solid tonsil hockey skills. It was a tough decision to go with this design over him staring at Alyonka Larionov's butt while making perogies with her, but tonsil hockey wins out. 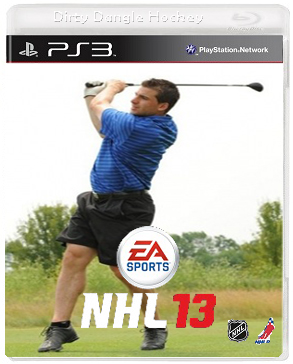 Unfortunately, John Tavares doesn't have any photos of him partying on the internet, or any real photos of interest to be honest - our theory is that he goes out a lot on Long Island, but nobody recognizes him. While JT should seriously consider launching his own version of the Tiger Woods series, he would also look good in a Team Canada world hockey championship jersey with advertisements all over him, as he recently signed a long term contract to always play in the spring tournament. 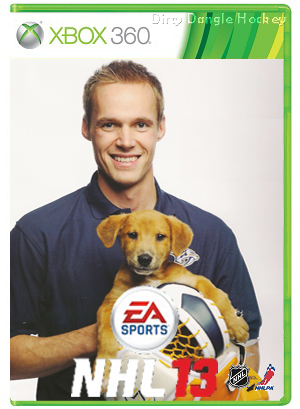 Another player with no fun photographs on the internet, but we did manage to find this one of him holding a puppy in his glove. This could be one of the top selling games in EA franchise history if they go with this design as you would have more females and kids buying the game thinking it was a cute pet-related game (or crazy people thinking you get to shoot puppies at Pekka Rinne). We're good with Rinne on the NHL 13 cover, but if he's wearing that beer shit-coloured home jersey, we're not buying the game.

Posted by Dirty Dangle at 1:38 PM
Email ThisBlogThis!Share to TwitterShare to FacebookShare to Pinterest