The LA Kings Shouldn't Have Surprised You 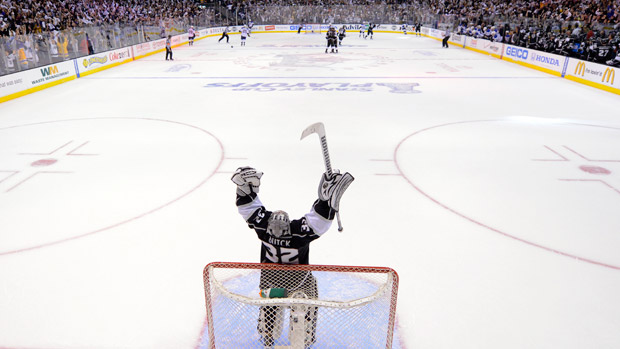 I've heard a lot of people say recently that they can't believe what the Los Angeles Kings are doing in these NHL playoffs. A #8 seed knocking out the #1 and #2 seeds which included the Presidents' Trophy winning Vancouver Canucks and the amazing defence of the St. Louis Blues. Sure beating Vancouver in 5 and sweeping St. Louis was a bit of a surprise, but seeing them in the Conference Finals is not mind-blowing. The Kings struggled to score in the regular season and barely made it into the playoffs with a 40-27-15 record, but woke up in the final two months just in time to roll into the postseason.

Before the season, a majority of people had the Los Angeles Kings to make the playoffs and challenge for the Pacific Division title, and their opening night Stanley Cup odds were a decent 14/1. With one of the highest salaries in the NHL and names like Anze Kopitar, Mike Richards, Dustin Brown, Justin Williams, Jack Johnson, Drew Doughty and Jonathan Quick, it's not hard to see why so many held them in a bright light. Well, swap Jack Johnson out for former 46-goal scorer Jeff Carter at the trade deadline and the team looked to be even stronger on paper.

The Kings would underperform, but still hold their own in the regular season until February when they looked like the Toronto Maple Leafs going 5-7-2 in that month and losing some pivotal matchups to sit at 70 points with one month to go in the season. They would finish the season 11-4-3 and qualify for the playoffs in the last week of the season, even competing for the Pacific Division title with the Coyotes and Sharks. There is no better time for a struggling team to catch fire than in the month of March as they are already heading into April in survival mode.

In that late season stretch, the Kings would average 3.11 goals/game, which would actually bring their goals/game average from 2.06 goals/game to a 29th ranked 2.29 goals/game for the season (yes, that's how poorly they were scoring goals). They scored almost a third of their season goals in the final 18 games and have kept that 3 goals/game pace going in the playoffs against very good goaltending in Roberto Luongo and Brian Elliott (Cory Schneider actually kept them at 1.33 goals/game). A team that can fill the net, but also shutout teams is a very dangerous playoff team as the Kings have shown in their 9 games this postseason.

There's been a lot of "feels like '93" talk going around, which can be right and wrong. Right in the fact that the LA Kings stuggled in the regular season including a 5-18-4 stretch that spanned two months and rallied in March/April going 12-6-3 to head into the playoffs hot and to to the eventual Stanley Cup Final. Wrong in the fact that these Kings do not have Wayne Gretzky, but instead are a much more-rounded team with one of the top goaltenders on the planet between the pipes. Read it any way you want, but these Kings are for real, and have been for some time.

Posted by Dirty Dangle at 12:30 AM
Email ThisBlogThis!Share to TwitterShare to FacebookShare to Pinterest