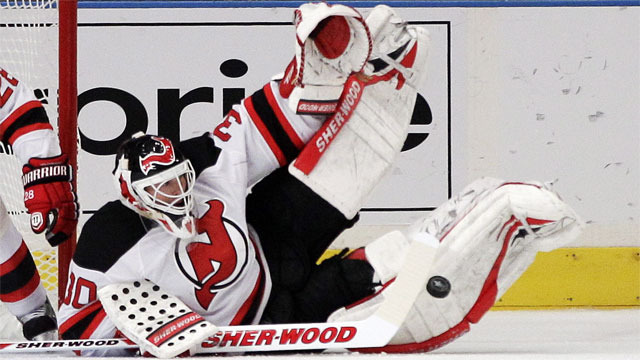 Back in January 2011, I wrote a post about Martin Brodeur and asked the question, is his NHL career coming to an end? He had been injured that season and losing playing time to Johan Hedberg. That 2010-11 season was just a massive dissappointment for him and the Devils as they finished 11th in the conference with 81 points and behind the Toronto Maple Leafs.

I ended that post with my thoughts on him rebounding and that I was pretty sure he had one more solid season left in him. If he could remain healthy he could be the Tim Thomas of this season. Now his regular season stats might have not been that great compared to Tim Thomas's big rebound year, but these playoffs he has played great and proved to everyone that there is still some gas left in the 40-year-old.

The three-time Stanley Cup Champion has a 2.04 goals against average and a .923 save percentage - not to shabby for a 20-year veteran. His performance so far has taken a back seat to the other amazing goaltending clinics being put on these playoffs with Mike Smith and Jonathan Quick playing out of this world, but Marty deserves some credit.

He's been a lot of fun to watch this spring, and getting to see his near-extinct way of playing goal is a real treat. He stands up when 90% of the goalies in the league drop into the butterfly - he also still tosses in a few two pad stacks and skates saves. Once Brodeur and Tim Thomas retire from the NHL, we'll mostly just have 6'2" guys who are massive (yet somehow lightning quick) sitting in the butterfly and taking the bottom of the net away. As an old school hockey guy I am going to miss this style.

If the Devils win the Cup, I wonder if Brodeur will call it quits and retire on top. It would be a great way to end a great career. If they lose, I can see him coming back for another year to pad his already Hall of Fame stats and have another go at trying to win another Cup.