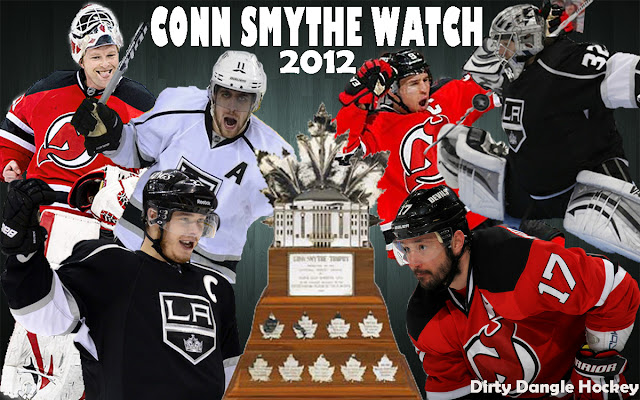 The Stanley Cup Final is upon us, which means there's going to be a lot of talk about who's the MVP of these playoffs. Every year, there's always a few frontrunners for the Conn Smythe going into the Stanley Cup Final; sometimes they're very obvious, sometimes there's just a lot of talk. Regardless, the Conn Smythe is reserved for those legendary playoff performances that can help define your career and to even be mentioned as a Conn Smythe candidate means your doing something right in the spring months.

Let's take a look at some of the potential Conn Smythe candidates:

Quick has been a brick wall for the Kings these playoffs and if his play keeps up, he's a strong favourite to take home playoff MVP. With a league best 1.54 GAA, .946 save percentage, 2 shutouts and only 2 losses entering the Stanley Cup Final, Quick is on the verge of posting some historic playoff numbers. Quick has one of the best save percentages and goals against average in playoff history (minimum 14 games played) and if he keeps it up he'll hold some records. Right now Quick is playing like that kid who used to play AAA hockey, but decided to play houseleague for a year to play with his friends. Flat out domination.

Don Cherry must love that Kovalchuk is leading the playoffs right now with 18 points in 17 games. Kovalchuk has been battling an injury these playoffs and still has been able to help his team get to the Final. Not surprisingly, Kovalchuk is the league leader in power play goals with 5. The Kings will have to play some disciplined hockey and keep Kovalchuk from ripping one-timers from the point with the man advantage. Forget about Kovy's nationality, you gotta respect any guy who is battling through injury and still putting up big goals and points for his team in the playoffs.

He is 40 and still diving around like a young kid making big saves. His stats haven't been spectacular, but his 2.04 GAA and a .923 save percentage have definitely helped the Devils make it to the Final. If you've watched any Devils playoff action you've seen Marty battle it out and put on a heroic performance, which at his age is amazing to see. It's always fun seeing Brodeur flopping around like a street hockey goalie and proving that the two-pad stack is alive and well.

There is a pretty good chance Brown won't be getting a Christmas card from the Doan family this year, but I am pretty sure he won't give a shit about that. Brown has been the backbone for the Kings these playoffs leading the team physically with 67 hits and on the scoreboard with 16 points in 14 games. Dusty also is tied for the league lead in game winning goals with 3 and shorthanded goals with 2. Brown has definitely put those February trade rumours to rest, and proven to hockey fans what wearing the "C" on your jersey truly means.

Middle of the Pack

With 7 goals and 14 points, Parise has been helping the Devils get wins, but the NJ captainl will need to step it up this Final if he wants a chance at the Conn Smythe. If he has an offensive explosion he could end up leading the playoffs in goals, and if some of those happen to be game winners in the Stanley Cup Final, it would be hard to argue with that.

Trailing captain Dustin Brown with 15 points, Kopitar is also getting it done defensively with a +13. Kopitar may not be getting the credit he deserves from LA sportscasters, but if you've seen his shorthanded dangles then you know he is playing for keeps. If Anze has a big series and lights up the Devils, he could be the first Slovenian to take home the playoff MVP award.

Another player who's playoff MVP hopes will rest on his performance in the Final. Richards has been all-around great for the Kings with a strong physical presence and offensive contribution on a consistent basis. The former Flyers captain has been to the Stanley Cup Final before and that experience could be huge for the Kings dressing room. If he puts up big goals then there will be some support for Mike Richards deserving the playoff MVP (to share with BFF Jeff Carter of course).

Dustin Penner has performed well above expectations. The butt of all breakfast jokes, Penner has put up 3 goals and 10 points, including the series OT winner against Phoenix. While he may not be putting up the big point totals he has in recent years, Penner has Stanley Cup experience with the Ducks and could be an important cog in the Kings machine on their way to the Stanley Cup. 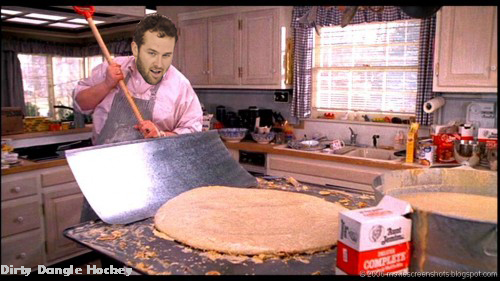 You may have been surprised to see Bryce Salvador's name on the scoresheet so often these playoffs, and you should be. His 11 points lead all defencemen still in the playoffs, and he already has more points than he did in all 82 regular season games. I have no explanation for this offensive production, especially in the playoffs where Salvador had only had 4 points in 50 games before these 2012 playoffs. He's definitely a longshot, but he deserves some recognition for his playoff achievements.

His 7 goals and 12 points have him among the league leaders in playoff scoring, which is great to see from a guy who's been battling a serious injury this past year. Zajac tore his Achilles tendon in the offseason, tried to come back a little too early and struggled, and then forced himself on the shelf until late March. In all, he saw 15 games this season before helping the Devils reach the playoffs. If there was a playoff Masterton candidate, it's Travis Zajac.

Who do you think will join the list of Conn Smythe Trophy winners this year?