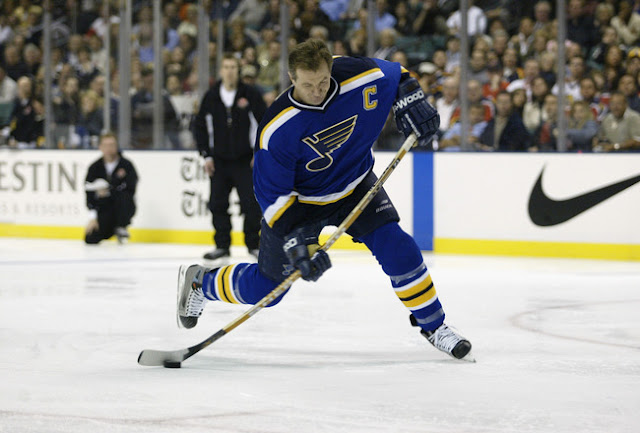 Al MacInnis was one of the best defensemen in the NHL from the mid-80’s until the early 2000’s when he retired from the game. Al was probably best known for the missiles he would launch at opposing goaltenders and the occasional sucker who would attempt to block his 100+ mph blasts. I remember as a kid seeing highlights of Mark Tinordi stepping in front of an Al slapshot and the shot broke his shin pads and consequently left Tinordi out of the line up for a number of games. The best thing about Al doing all this was he used a wooden stick.

Here is a video if him breaking the boards with his powerful shot:

In addition to having one hell of a shot, Al was a clutch player who was very instrumental in the Calgary Flames winning the Stanley Cup in 1989. During that post-season, Al lead the league in playoff scoring with 31 points in just 22 games. That performance not only won Al the Cup, but Al also was named the Conn Smythe Trophy winner as the playoff MVP. Even though Al would only win 1 Cup, he would play in the post-season an astonishing 19 times and his 160 career playoff points ranks him tied for 20th all-time in the NHL. Who is he tied with? Gordie Howe, Mike Bossy and Bobby Smith! Not bad if you ask me.

Al finished his NHL career at a high level with his second last season consisting of 16 goals, 52 assists and 68 points in 80 games. However, in 03-04, MacInnis played just 3 games before hanging up his skates due to an eye injury he suffered that year. Al ended up with a career that would exceed the expectations of many and only Ray Bourque and Paul Coffey would exceed the 1274 points Al scored during the regular season and that point total is currently good enough for 34th all-time for any player.

Al just has one, and it is this OPC version from 85/86. This set has another famous rookie, Mario Lemieux. 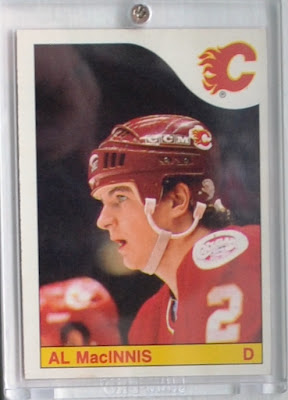 I love this card, no real reason, just a cool card. The book value on it right now is in the 18-30 dollar range.

I mailed away two cards, and in the span of about two months I got back two autographs. 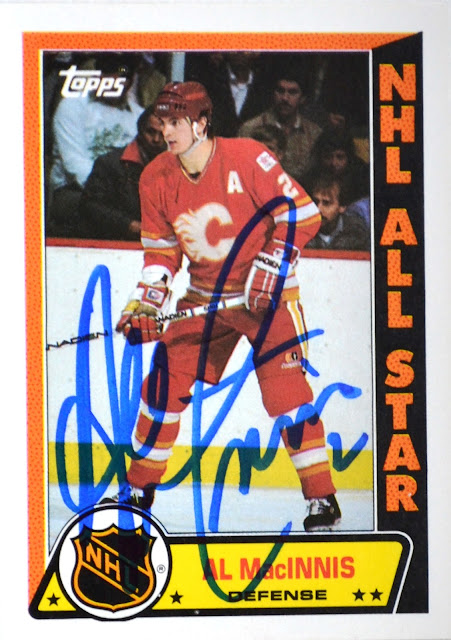 This auto is my favourite of the two. This card was an insert from the 89/90 Topps set and it actually is a sticker card. The autograph is large and in charge with him putting his #2 in the signature, just a nice classic auto. 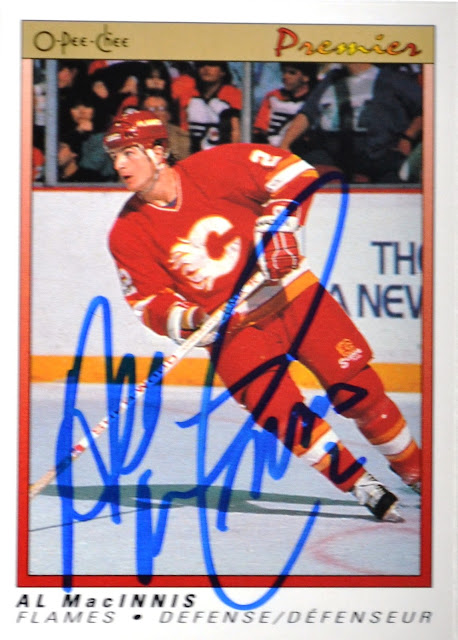 This card is from the 90/91 OPC Premier set. Not the first card I have set away from this set to get signed, but at 132 cards and some of the players being very hard to land autos from, I don’t ever expect to have a complete set signed.

Al took time away from his busy job with the Blues as VP of Hockey Operations to sign two beauties for me, and for that, I am thankful!

My next post will be about an autograph I just got - in person!
Posted by Dirty Dangle at 12:30 AM
Email ThisBlogThis!Share to TwitterShare to FacebookShare to Pinterest