You Live And Die By The Shot Block 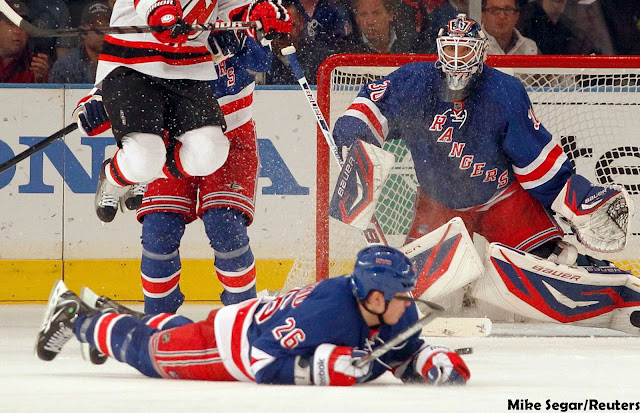 There's been a lot of talk about how all the shot blocking in these NHL playoffs is bad for the game. You can read these opinions here, here and especially here. Thankfully, some people that have actually played hockey have challenged this absurd viewpoint and defended shot blocking. I can only shake my head when I hear people writing about how the NHL should ban shot blocking - I don't even know how that would be accomplished. Would players receive penalties if the puck hit them on the way to the net? Do they know how stupid they sound when they write this shit?

Yes, there is a big difference in shot blocking nowadays compared to the 80's and early 90's when most of the players on the ice looked like little stick figures and didn't have massive equipment. NHL players back then really did sacrifice their bodies to block shots with the flimsy and cheap looking equipment they used, but still with today's superior equipment, players are still paying the price when they block shots. With the advances in hockey technology and equipment, players shots are much harder - just take a look at what Sami Lepitso's leg looked liked after his season was done.

Blocking shots can make an average goalie look great when you have a whole team committed and ready to sacrifice their bodies, but a player diving in front of a shot doesn't always help a goalie. The puck could deflect off the player and make it even harder for the goalie to stop. There is also the chance of the shotblocker screening the goalie and not blocking the shot, in which the goalie just prays for the puck to hit them or miss the net. I wonder if this has anything to do with Henrik Lundqvist playing so deep in his net? Does he play that way to give him a few extra split seconds to pick up the puck?

Shot blocking usually means a lot of traffic in front of the net and bodies diving all over the place. As a goalie I never liked that and always just tell my defence to move guys out from the front of the net and clear the shooting lanes. If I can see the shot,  I should be stopping the puck and I don't need my players taking away my chance of making the save. Sure you love to see guys on your team stepping in front of clappers for you, but things don't always work out. I like to think that there's goals prevented by shot blocking, but that there's also goals caused by shot blocking - it balances itself out. Shot blocking is a double-edged sword that you live and die by, but there's one thing for sure - it's not ruining hockey.


Posted by Dirty Dangle at 12:39 AM
Email ThisBlogThis!Share to TwitterShare to FacebookShare to Pinterest