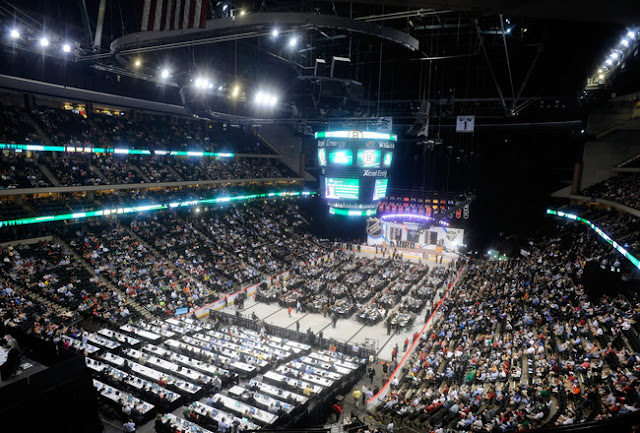 The Senators could draft local boy, Cody Ceci - one of the Ottawa 67’s greats for the last few years. Ceci could easily replace Rundblad as a defensive prospect, and Ceci paired with Jared Cowen is a scary shut down pairing for the future of the Senators organization. Ceci could continue to make the home town fans cheer and get a few more fans out at the 67’s games if he stayed another year in junior.

I don’t care how skilled he is, I don’t care how good his shot is, he weights 165lbs and that’s going to hurt him on draft day. Teravainen is a highly skilled forward with an extremely good shot and blazing speed who potted 8 points at the World Juniors this year. With Jay Feaster’s choice of picking up Cervenka because of a weak draft year for top line centres, he picks up a good winger in Teravainen to play with another small guy, Sven Bartschi, down the line.

Yes, he had a bad injury this year, but that seems to be a big theme this draft year. At 6’2”, 184 pounds, he has the potential to be a top pairing d-man who can play plenty of minutes. Now Koekkoek isn’t the safest pick at #13, and the Stars haven’t had the best success with risks, but Koekkoek has the potential to be the biggest steal if he recovers from the torn labrum. Wouldn’t be surprised to have him fall way lower than this, but I see this as a great spot.

Stepped into a bigger offensive role this year with the Storm and did well. Finn’s a good, strong two-way defenceman who is extremely effective with the puck. While the Sabres don’t need to add another D, he’s a top player left on the board and this gives them a chance to trade one of their other D and Roy for a better top line C. Maybe this pick is part of a trade for Jumbo Joe?

Pouliot played on a high octane offensive team in Portland and posted 59 points in 72 games. He added 17 points in 22 playoff games, but what he really lacks is a strong physical frame. At a lanky  6’0” 180lbs,  Pouliot has at least two years of development before he’s ready for NHL action in which he could become a #3 or #4 defenceman with the ability to quarterback a powerplay.

Trouba is potentially the best shut down d-man in the draft with great movement and balance. He has a great shot from the point and should pair nicely with Victor Hedman on the blueline. At 6’2” 200lbs, Trouba should fill out to be a big defenceman that can separate any forward from the puck with some development. His leadership abilities are off the charts as well with his best play coming in key moments of big games - pair that with Stamkos and the Lightning future is bright.

A premier shut down d-man, Reinhart usually plays upwards of 30 minutes a night for the Oil Kings and shuts down top offensive players on other teams. On top of that, he can also add some offense as he did last season with 36 points. With the need of a shutdown guy in Winnipeg, Reinhart fills that void and has fan favourite potential all over him with his style of play.

Whenever I watch this guy I am amazed: amazing skating, amazing balance, amazing hockey sense, amazing puck handling skills (actually just insert something you want about a player and put the word amazing before it). He does shy away from physicality, but he does lower the boom when he hits. After a year of developing in the OHL, Maatta should be ready for top four minutes in the NHL and be a major cog on the powerplay. This may be the steal of the draft for Carolina as I see him as the d-man with the highest ceiling in this draft.

Purely an offensive d-man, Rielly has PP quarterback written all over him. Another top prospect who played limited games this season due to injury, Rielly still managed 18 points in 18 games during the regular season and worked hard to return for the WHL playoffs. His offense and hockey IQ are tops among the draft pool, and his commitment to hockey was proven by his work ethic to return this season. Morgan Rielly would definitely boost the Wild's defence as a blueline scoring threat.

After likely losing Justin Schultz, Dumba fills his void on the blue line for the future of the Ducks. Dumba is an elite offensive player and throws monster hits. He has an excellent shot as well as good puck moving abilities that make him an all-around top pairing d-man. He can change the game in so many ways and for the Ducks who have struggled in recent years, he is just what they need.

Grigorenko slips to #5 and yet again the top rated QJMHL player (at the start of the year) could be a steal, like Couturier. Grigroenko has the size and skill to be a top line centre in the NHL. Many were worried about him going to the KHL, but he's assured all the clubs that he's committed to the NHL (he did come over to North America for junior). Grigorenko has certainly slipped in the rankings throughout the year, but with his offensive abilities, he could be a steal at #5.

With a lot of top-six players already, Garth Snow has the great opportunity to add to that lineup and potentially move one of his more established players for some defensive help. Galchenyuk should spend a year in the OHL to make sure he recovered from a knee injury that caused him to miss the majority of this season, but make no mistake, he is a top prospect. He'll make any team better, even the Isles.

Hardest pick to determine in the draft as the Habs have so many needs. Forsberg has the potential to be an elite top-six LW in the league and could be ready to play next year. Adds some skill and size to a Montreal line-up that has been trying to add both these past few years. While he's no Peter, Filip will be a handful for opposing teams trying to knock him off the puck.

So the Blue Jackets get a top d-man that looks like he could be able to play in the NHL next year (hey, it is Columbus). After a solid World Hockey Championship with great positioning and poise, Murray could be the most NHL-ready prospect. Sucks he has to go to Columbus though.

A top flight, offensive player, Yakupov will only strengthen that great core of young Edmonton players. How can the team seriously skip on the top player in the draft that has been one of the top prospects for two years? After an awesome rookie OHL campaign, Nail battled through some injuries this season, but still remained the consensus #1 pick, where he belongs.

Posted by Dirty Dangle at 4:16 AM
Email ThisBlogThis!Share to TwitterShare to FacebookShare to Pinterest