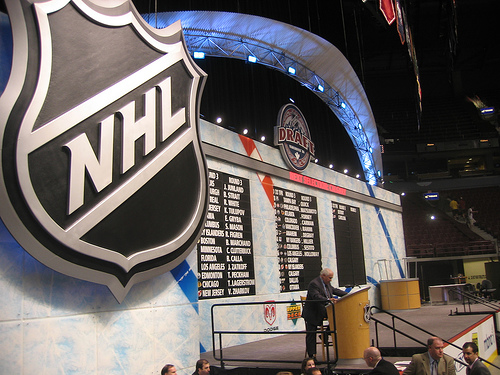 A combination of grit and skill makes this oft-injured Czech winger a potential steal at #30. At this time last year he was a lock for a top 10 pick and a potential top 5, but was limited to only 34 regular season games this year and missed the World Juniors with a concussion. He's definitely high risk, high reward, as at full health he can be Frkin amazing.

With strong bloodlines, Subban should end up being a first round pick and if he is still around at #29 you can bet the Devils will take a shot on him. With Marty Brodeur close to being doneski, the Devils are going to want to start stockpiling some goalie talent and Subban could be their future. Known for his athleticism, Subban has improved every year in the OHL and has earned a spot on the Canada-Russian Challenge team.

Sure the last thing the Rangers need is another goalie, but why not develop Dansk under Lundqvist? Dansk has had the most consistent season of all the goalies in the draft and has remained one of the top 3 goalies all year. Dansk plays similar to Lundqvist, so it'd be a good fit for learning, and who knows how King Hank will be when he hits 35? The Rangers could get a great pick up late with Dansk and usher in the King Oscar era in 2020.

After being a no show offensively and defensively in the OHL playoffs, Gaunce’s stock has dropped. The questions of his talent have also come to question, however after watching the Coyotes in the playoffs and they’re excellent use of guys that should be 2nd/3rd liners throughout the entire line up makes a Gaunce-Yotes fit a perfect match.

After adding Kassian at the deadline, the size additions can continue by adding the 6’4”, 210lb Swede. Lundberg’s skating has improved, but remains his biggest issue. With continual work, Lundberg could be a strong power forward option in the NHL.

Collberg is extremely skilled and provides a lot of speed with a good shot, despite going pointless in 41 games in the Elitserien playing with men. He saw limited icetime with the big boys, and was much more effective with the Frölunda juniors and helping Sweden win gold at the U20s. With some added size to his frame and time to develop Collberg should make a reliable two-way forward.

Girgensons has good size and is a solid two-way player. A great leader, he wore the “C” for his USHL team in his second season there, as well as an “A” for Latvia at the U20s. Known for his hard work and determined play, Girgensons could be a great pick just for his character in the dressing room. Going to college, he'll have a few years to develop into a second line centre.

With questions surrounding Crosby’s long term health and Jordan Staal potential leaving the team, the Penguins should add Hertl. A strong two-way player that showed a lot of skill posting 5 points in 6 games for the Czechs at the World Juniors and put up 25 points in 38 games while playing with the big boys in the Czech Extraliga. A very smart player who could learn from some very smart guys in the Pittsburgh organization.

Committed to Wisconsin for next year, Kerdiles is a steady offensive player. With 9 points in 6 U18 games, Kerdiles had a small coming out party. With a few years for development, he is a safe pick for the Sabres in a draft pick they probably should have never gotten, seriously a first round pick for Gaustad?

A little off the board for the Flyers, but Thrower has a lot of nasty in his game for a potential top 4 d-man. With 9 fights this year and 103 PIMs to go along with some good offensive numbers of 54 points in 66 games, he has Flyers material written all over him. Saskatoon seems to be the center of creation for defense recently and Thrower looks like the next great product.

Has proven his high skill set since going to the Edmonton Oil Kings from MODO and was the best Oil Kings forward in the Memorial Cup. Samuelsson can do just about everything: get under opponents skin, hit, skate, and score; sounds like he could replace Steve Downie.

A great postseason for Laughton showed how great this kid really is. He out played both Boone Jenner and Nicklas Jensen to be the best Generals player (behind writers friend Dan Altshuller of course). Laughton isn’t afraid to drop the gloves (6 in the regular season) to go along with a solid offensive game. With some time to fill out, Laughton looks to be a potential solution for a #2 C who can contribute in all areas of the game.

The Sharks need help for the future in every aspect of their game and Faska provides that potential for success. Faska could potentially be a 2nd line centre, but don’t expect much more than that from him. Sure he had a solid season with the Kitchener Rangers, but he disappeared on the big stage at the U20s.

A top offensive defenseman with great speed for his size, Lindholm should fit the Washington blue line nicely as they are in need of this type of player. Very mature on the ice, he is still a very raw player and needs to develop for at least one or two years.


15th-1st will be released on Thursday.


Posted by Dirty Dangle at 1:36 PM
Email ThisBlogThis!Share to TwitterShare to FacebookShare to Pinterest