What Does A Shallow Free Agent Pool Mean? 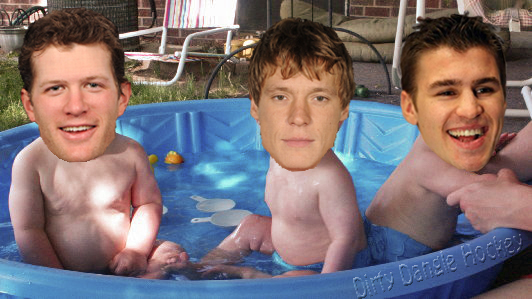 As NHL Free Agency is set to kick off tomorrow, there is the usual speculation of where players may sign. There's the big fish - Zach Parise, Ryan Suter, and Alex Semin - but that's about it. Free agency is the time where NHL clubs can finally address a certain need or want by winning the player over with an offer they can't refuse. Unfortunately, the free agent pool is pretty shallow this year which means teams will be hard pressed to fill the holes in their line ups with players they need.

This means a few things:

Many NHL GM's have already said that they expect more trades than usual this offseason. With not as many players available to sign, GMs need to address their needs via the trade route. We've already seen long contracts moved (JVR for Schenn) and short ones in which a team will then have a year to negotiate an extension (Jordan Staal). Other big names coming up in trade rumours include Rick Nash and Roberto Luongo.

Dale Tallon was very generous with his money last year as he spent like an 18-year-old at his first strip club. Tallon had to reach the cap floor and we saw Scottie Upshall sign a $14M deal over 4 years and Sean Bergenheim sign a $11M deal over 4 years. With an even higher salary cap this year and the floor at $54.2M, we could see more teams offering third and fourth liners ridiculous amounts of money for their services. They may not deserve it, but teams need to spend and if these are the only guys available then some of them will be overpaid.

Another let down for an overhyped day. Free Agency Frenzy just doesn't have the same mojo it did years ago when more big name free agents were looking for new teams. Now players sign massive contracts so there is always a 3 or 4 year period where the free agent pool is dryer than a 1970s California in-ground. It's never good when a player who has never played an NHL game is one of the top free agents.

We've already seen many of the more enticing UFAs re-sign with their teams (Gleason, Harding, Jackman, Nielsen and Stoll) so you won't have to move them to another team. And with not as many signings to be dolled out on Sunday, your update shouldn't take too long and you can be playing with Ryan Suter on the Red Wings faster than you think.

Some New Faces Testing The Waters

The hockey world was caught off guard by two veterans announcing they were going to the test the free agent market as UFAs, but really it's the perfect time for them to. Shane Doan, who has been with the Coyotes franchise for 16 seasons will be testing the market at age 35, and could find himself with some solid offers on the table. And then there's the 40-year-old, Martin Brodeur, who has been with the Devils for 19 seasons, but  wants to test free agency as he is no closer to re-upping with New Jersey. Inconceivable right? While their reasons for testing free agency may be ownership-related, there has to be some monetary incentive in there too with the cap rising and not a lot on the market. These two loyal guys could find themselves new homes and with a lot of cash in their wallet.

It may not be the most exciting pool of free agents, but with an expiring CBA it may be our last chance to watch a hockey related show for a few months. And not to get too excited for next year, but the free agent pool is much deeper.
Posted by Dirty Dangle at 12:14 AM
Email ThisBlogThis!Share to TwitterShare to FacebookShare to Pinterest