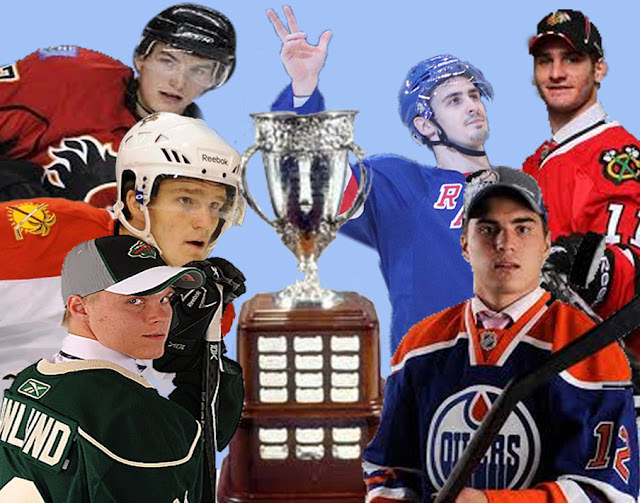 
Here's a look at some of the rookies who have a chance to win the 2013 Calder Memorial Trophy:

Yakupov is the 1st overall pick from last month's draft so many people will have him as the favourite to win the rookie of the year for this upcoming season. Yakupov is pretty much guaranteed to get 2nd line minutes and enough power play time to put up 50 points next season. It will be interesting to see the kind of chemistry he has with the rest of the Oilers young guns.

Saad was a 2nd round pick (42nd overall) in 2011, but has sky rocketed up the Blackhawks depth chart and even found himself in 2 playoff games for the Blackhawks in April. In 44 games in the OHL for the Saginaw Spirt last year Saad put up 34 goals and 76 points. The Blackhawks are very high on him and I wouldn't be surprised to see Sadd make the team out of camp and have a big year.

The Minnesota Wild hit a home run during free agency when they landed Zach Parise and Ryan Suter, but things were looking bright long before those signings when super prospect, Mikael Granlund, signed an entry-level contract in May. Many people will remember his highlight goal in the 2011 World Championships, but Granlund is actually more of a set up man and sees the ice at an elite level. Granlund is one of the scout's favorites to win the rookie of the year award next season and could develop fast under the guidance of fellow Finnish countryman, Mikko Koivu.

Kreider joined the Rangers last year after finishing his stellar college career with Boston College. In 44 games he scored 23 goals and had 45 points to lead his team in scoring. Kreider still hasn't played an NHL regular season game, but did suit up for 18 playoff games this past season and scored 5 goals and chipped in 2 apples for 7 points. Depending on his ice time next year Kreider should score 20 goals turn heads just as he did in the postseason.

Huberdeau is a lock to be the Panthers number one centre in a few years and should make the team this year with nothing left to prove at the junior level. He had a great camp last year scoring 3 goals and 1 assist in 5 preseason games to the lead the Panthers preseason scoring, but narrowly missed making the team as an 18-year-old. He had a strong enough performance to make the Panthers, but management wanted him to bulk up and didn't want to rush their prized prospect. Injuries slowed Huberdeau down last season and he only played in 37 regular season games, but was able to rack up 72 points and 9 points at the World Juniors where he won the bronze medal with Canada.

When you think of the Calgary Flames you think of a team that is always just on the cusp of the playoffs and refuses to actually do a rebuild. You also think of a team that has drafted poorly and traded away picks for aging veterans to try and make the playoffs every year. Well Sven Bartschi my just be the savior this team needs. In just 5 games with the Flames last year as an emergency recall, Bartschi scored 3 goals and he lit up the WHL scoring 94 points in 47 games. Seems NHL ready to me.

Posted by Dirty Dangle at 4:37 PM
Email ThisBlogThis!Share to TwitterShare to FacebookShare to Pinterest