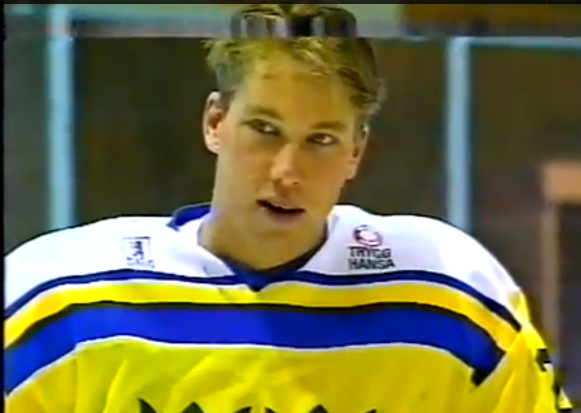 While the search for highlights from the '93 tournament have often come up empty (I'm dying to see the game when Sweden shelled Japan 20-1 and Forsberg put up a tournament record 10 points in a single game), someone has finally put up Peter Forsberg highlights from that '93 tournament and man are they good. He throws some big hits, has some nice rushes and serves up apples all day to his linemates. The best part of the highlights are that they look something my dad filmed in the 1980s with visible VHS tracking.

Here is Part One of the highlights that show a bit of Sweden's training camp and their game against Czechoslovakia.

And here is Part Two, which includes highlights against Canada and a dirty Chris Pronger hook.

Posted by Dirty Dangle at 1:14 PM
Email ThisBlogThis!Share to TwitterShare to FacebookShare to Pinterest