What Would A Weighted Draft Lottery Look Like If There's A Lockout In 2012-13?

With the news of the NHL's first CBA proposal breaking on Twitter last night and spreading a great deal of pessimism into the hearts of hockey fans, many believe the NHL/NHLPA are on course for another lockout. This would mark the 2nd lockout in 9 years and we all remember the 2004-05 lost season. That was a brutal year, except for the Pittsburgh Penguins, who landed the top prospect at the time and current superstar, Sidney Crosby, thanks to winning the 2005 Draft Lottery under a weighted system (Pittsburgh model my ass!). This raises the question: what would a weighted Draft Lottery look like in 2013 if there was no 2012-13 season?


The Draft Drawing for the 2005 NHL Draft was weighted as such:

Each NHL team got either 3 balls, 2 balls, or 1 ball in the lottery. Teams that failed to qualify for the Stanley Cup Playoffs in the three seasons before the Draft, or were not awarded the first overall selection in the previous four NHL Drafts had the best chance of winning the lottery by being awarded 3 balls. If a team met one of the criteria above, they were awarded 2 balls, and if a team met more than one of the criteria, they were awarded only 1 ball. In 2005, four teams had 3 balls (6.3% chance), ten teams had 2 balls (4.2% chance), and sixteen teams had 1 ball (2.1% chance) for a total of 48 balls. In addition, the Draft operated as a snake draft in which the team picking 30th also picked 31st, and the team picking 1st would pick 60th and so on. 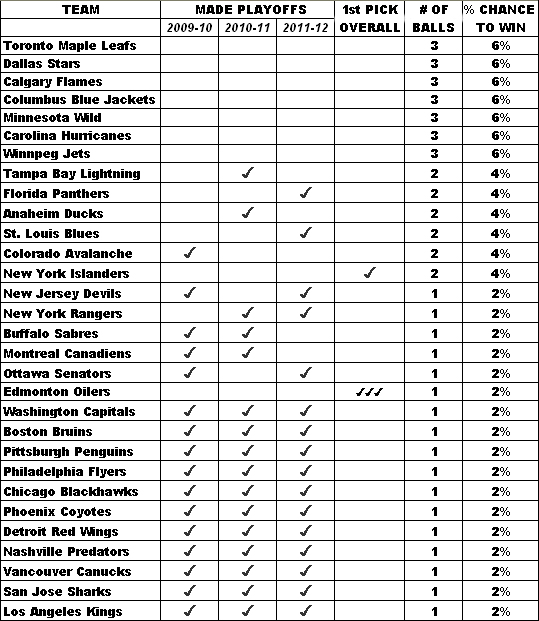 Differing from the 2005 Lottery when only 4 teams had 3 balls, we would have 7 NHL teams with 3 balls in 2013. This also means there would be more teams with 3 balls in the Lottery than teams with 2 balls (6 teams). There would be 17 teams with only 1 ball in the Lottery. A 2013 Lottery would also be pretty interesting for Columbus as their chance of winning would increase to 8% as they receive the Kings 1st rounder as a result of that Jeff Carter/Jack Johnson deal. In addition, thanks to the inverse order in the 2nd round there are six teams that could benefit from receiving a much higher 2nd rounder than anticipated as a result of trades made this past season.

Posted by Dirty Dangle at 10:35 PM
Email ThisBlogThis!Share to TwitterShare to FacebookShare to Pinterest