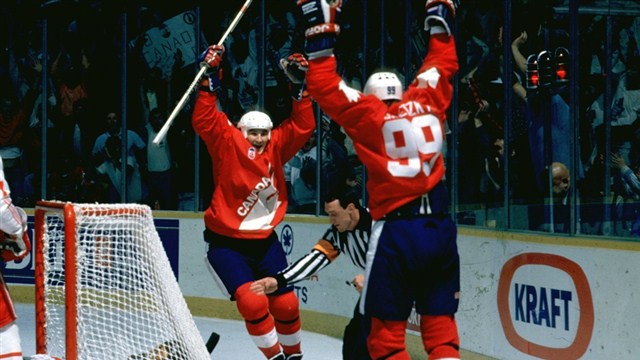 Over the next three nights, TSN will be showing the 1987 Canada Cup Final between Canada and the Soviet Union in primetime. Since the end of August, ESPN Classic has been showing the round robin games 25 years to the date of each game, and now it's time for one of the greatest tournament finals in hockey history to be aired. If you have the time and you've missed hockey, these games are definitely worth checking out.

Each of the final games resulted in a 6-5 score and there was no shortage of dramatic moments as Canada rallied from multiple 3-goal deficits and the brink of losing the tournament in overtime to win what is considered to be the best display of hockey in the sports history. The game you won't want to miss will be Game 2 in which Canada won in double overtime in what is considered the greatest game of hockey ever played and what Wayne Gretzky considers the greatest game he's ever played - which is saying something. Gretzky was so wiped during that game that he actually pissed his hockey pants during the first overtime because he was so exhausted from being double and triple-shifted. With wet pants, he still went on to set up Super Mario for the game winner for his 5th assist of the game and push the series to a deciding third game.

Most however, will remember the tournament for the famous Gretzky to Lemieux goal in the dying minutes of the deciding game as that goal is up there in all-time Canadian hockey moments with Paul Henderson's game winning goal in the 1972 Summit Series and Sidney Crosby's gold medal-winning overtime goal at the 2010 Olympics. Gretzky and Lemieux would lead the tournament in scoring with The Great One posting 3 goals and 18 assists on his way to being named Tournament MVP, and Le Magnifique posting a tournament leading 11 goals and 7 assists on his way to making the Tournament All-Star Team. Those two on the same line just wasn't fair, and it's really something to be able to watch two of the top offensive players in hockey history play together.

If you miss any of the games on TV, you can watch them on YouTube in all their glory. Here's Game 1: