Pissed At NHL Owners? Reasonable Ways To Hurt Them In Their Wallets 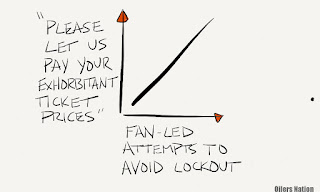 Building up the eventual lockout and the few days in which it's been official, we've heard of fan boycotts and pledges to lockout the NHL themselves. Some sites have even listed the holdings of NHL owners in which fans will have an easy guide to boycotting other companies that NHL ownership may be involved with. It's a consumer boycott to let the owners feel some heat during a lockout and not a bad idea in principle as if enough people actually followed suit you might actually see a decline in sales.

We've seen some pretty creative fan protests such as the usual raucous Toronto F.C. fans refusing to cheer during a game creating an eerie atmosphere in a typically loud stadium. There's always fans willing to wear a brown paper bag over their face during the game, and some might even get so riled up they'll throw waffles. The most common thing you'll hear in times like this is fans saying they will never attend another game again. While refusing to cheer, hiding your face at games and shaming your team with Eggo's are quite humourous, they don't actually work. And since boycotting games is unrealistic as there will always be corporate tickets being distributed and seasons ticket holders who won't want to forfeit their seats, you'll need need to find other ways to hurt the owner's wallets.

Boycotting specific consumer goods or retail chains may be hard to keep track of, but you can definitely make your voice (and money) heard by saving money and still cheering for your favourite team. We're going on a limb here and saying that these owners have a pretty good financial team and are aware of exactly where all their profits are coming from and so on. If they see a decline in profit happening, they will notice. Here are some easy ways to save money and hurt the wallet of the owner who is locking you out:

Instead of paying your cable company an extra charge to some bullshit channel (Leafs TV) that you'll only watch during games and not really enjoy the coverage, cancel that shit. If all fans just walked out on this subscription the owners would get a message that fans won't pay to watch televised games. You can still watch the game, just go to a bar or pub and support a local business.

We shouldn't have to tell you this, but paying $10 for a beer is nuttier than Tim Thomas. While we love a cold beer during the game, just have a few beforehand or afterwards and save some coin. Teams will notice when their alcohol sales take a Keslerian dive. Not limited to beer, paying double the amount for a hot dog you can get outside on the street or nachos you won't even be satisified with is loony too. Leave your money at home and bring your own snacks such as candy or nuts if you really need something that badly. If concession sales go down you might even see the prices go down in the future.

Hold off this year on buying any team jerseys, hats, mugs, flags or anything other stupid thing they slap their logos on. While we can't believe that people actually buy half this shit, the ramifications of not selling any merchandise during games or at local stores will be felt by any ownership. If you really do need team merch, just go to that sketchy Asian mall in your city that sells the pirated DVDs and buy some knockoffs.

In today's world of Twitter, Facebook, Reddit and other social media outlets, it's very easy to find others that feel your pain. It's also very easy for companies to see what people think of their products and they actually pay a lot of money for social listening and research in this area. Use these outlets to band together and bitch and complain about owners' products and really give their PR team's something to handle.

Of course, if none of this works, you can always find out where the owners live and egg their houses on a nightly basis for fun.