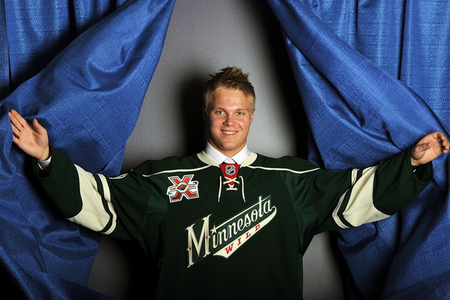 I have wanted to write about Mikael Granlund for quite some time now as he is one of my favourite hockey prospects despite not playing an NHL game. Talking hockey prospects has always interested me because there is just so much hope and promise with these young players coming up through junior, college and from Europe. While I follow these young guns for Sim League drafts and for NHL 13 draft scouting, these kids are also the future of the sport and I like to know who the next up-and-coming NHL stars are going to be.

Mikael Granlund was drafted 9th overall back in 2010 by the Minnesota Wild. The 8 players taken before him have already played in the NHL and many believe Granlund could have made the jump to the show as an 18-year-old, but because of Finland's military service requirements, he was busy hanging out in Helsinki and lighting up the Finnish Elite League with HIFK Helsinki. In the SM-liiga, Granlund would take home Rookie of the Year and Most Gentlemanly Player honours in 2009-2010, and after helping HIFK win the SM-liiga championship and Finland win the World Hockey Championship in 2011 he would be named the Finnish Ice Hockey Player of the Year. Those are some pretty great honours for a teenager playing with men.

Granlund is an elite prospect and Minnesota Wild fans will get to see him in action this season (if it happens) as his military service is all done and he's moved across the pond after signing an entry-level contract with the Wild. He is slightly undersized at just 5'10", but he can make up for that with his creative playmaking and his unreal vision on the ice. He will be a player that puts up more assists than goals, but he can still find the net and is known for his amazing dangling ability and highlight reel goals.

Remember this amazing lacrosse style goal at the 2011 World Championships in the semifinals against Russia?


That goal was so popular back in Finland that Finnish Hockey Mafia released the single "Taivas Varjele" featuring sampled comments of the goal that ended up becoming a top song in Finland (why didn't deadmau5 release a track of samples of Crosby's gold medal-winning goal?).

Coming into camp, Granlund is projected to centre the 2nd line and will be given ample opportunities on the powerplay to show off his slick playmaking ability. Granlund is one player I am looking forward to watching this year and if the NHL lockout does happen he has stated that he will play in the AHL instead of going back to Finland so we will get a chance to see the young star at some point this season.