Will We See 60 Goals Again This Year? 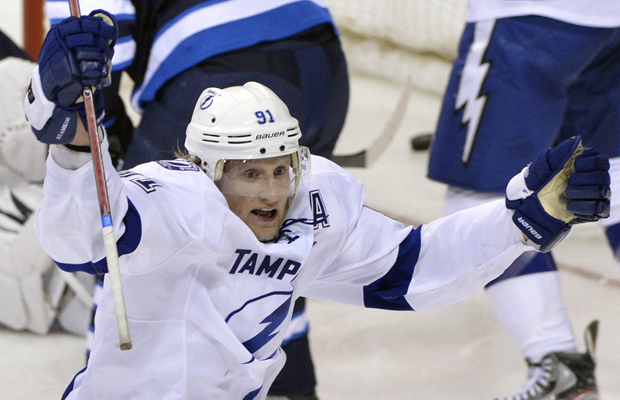 Last year, Steven Stamkos amazed us by capturing his second Maurice "Rocket" Richard Trophy and hitting the 60-goals mark at the age of 22. It was the 39th time that a player has scored 60+ goals and Stamkos became just the 20th player to hit the mark in a single season. With that being said, scoring 60 goals is pretty rare and not many will forget when Alex Ovechkin torched the league for 65 in 2007-08. Ovie's 65 is memorable not only for his flair on most of them, but because it was also the most goals scored in 12 years since Mario and Jaromir lit up the league in 1995-96. Of the other 19 players to hit 60, only 8 have done it multiple times meaning Stamkos will be looking to join some pretty elite company this season, but he won't be alone in the 60-goal pursuit.

Evgeni Malkin returned in full force last season winning the Art Ross by 12 points and hitting the 50-goal mark for the first time in his career. With a healthy Sidney Crosby, Malkin could reach 60 rather easily and maybe he and Sid could bring back some of that 95-96 Mario/Jagr magic. Ovechkin's goal scoring potential is always there, and with Adam Oates behind the bench he could be let loose like the good old days this season. Former Maurice "Rocket" Richard Trophy winner, Rick Nash, could shine on Broadway with Richards and Gaborik and earn that cap hit by potting his jersey number in goals. There are no shortage of candidates to hit this mark, but our money is still on the pure sniper, Stamkos. Training with Gary Roberts has not only helped him make Barry Melrose look like even more of an idiot, but given him the dedication and discipline to be the best hockey player that he can be, which is pretty damn good. With that said, if there is a full season this year, we could see a few players racing to the 60-goal mark. What do you think?

Here are all of Stamkos' 60 goals from this past season:


And some background on those 60 goals:

Posted by Dirty Dangle at 11:46 PM
Email ThisBlogThis!Share to TwitterShare to FacebookShare to Pinterest