Get To Know The Swedish Elitserien

The Swedish Elitserien was founded in 1975 and has grown to become one of the most competitive leagues in the world and higher attended hockey leagues in Europe. The Elitserien has roots dating back to the Swedish Division I and the Swedish ice hockey championships which have awarded a champion of Sweden since 1922. An amazing part of Swedish ice hockey history and the Elitserien is that the championship trophy awarded every year was donated by an American film director, Raoul Le Mat, with money from Metro-Goldwyn-Mayer (MGM) in 1926 and is named after Le Mat to honour him as one of the founding fathers of Swedish hockey.

Here are some of the things you can expect to see if you start following the Swedish Elitserien this year:

The 12 teams that make up the Elitserien play a 55 game regular season in which they play each team 5 times and are awarded 3 points for a regulation win, 2 points for an OT/SO win, and one point for losing in OT/SO. At the end of regular season, the top eight teams qualify for the playoffs and the 1st place team is awarded 1,000,000 SEK as a prize for being league champion. The playoffs are kind of funny as the 1st place team gets to choose which of the bottom two seeds they'll play in the first round, then 2nd place gets to choose between the remaining two lowest seeds and the 3rd place getting to pick from the scraps left for them. The teams face off in best-of-seven series until a Swedish Champion is crowned and awarded the Le Mat Trophy.

The bottom two teams at the end of the regular season enter a relegation/promotion tournament called Kvalserien in which they play four other teams from the Swedish second-tier league, HockeyAllsvenskan. Each team plays each other twice for a total of 10 games and the top two teams in the Kvalserien play in the top tier Elitserien the following season while the other four play in the HockeyAllsvenskan. 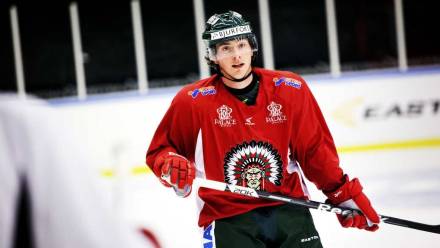 Before the lockout was announced the SEL decided not to accept rental players and only wanted players willing to sign long term contracts or full season commitments. This ruling was overturned in mid-September allowing for Swedish clubs to sign locked out players, however not many NHLers have made the jump to Sweden since the ruling. Alexander Steen is the only NHLer to play so far and is leading his Modo team in points in only a few games. We're still waiting on Viktor Stalberg, Cody Franson and Matt Duchene to make their debuts with their respective clubs. There could be more players heading home including Henrik Lundqvist, Tobias Enstrom and even the Sedin twins if this lockout postpones the season further. 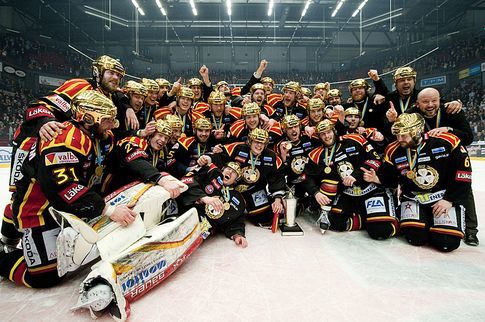 Differing from the NHL and most other leagues, there is only one award based on statistics during the regular season and that is the Håkan Loob Trophy for goal-scoring. The Elitserien's most valuable player award is voted for by the players in the league and is called Guldhjalmen and is simply a gold Jofa helmet. There's also a Swedish ice hockey player of the year award called Guldpucken which can be awarded to any player in the Elitserien or HockeyAllsvenskan. The rookie of the year award (Arets Rookie) and the Honken Trophy awarded to the top goaltender are decided by a panel of Swedish hockey journalists. An interesting award they have is the Guldpipan (golden whistle) which is given to the top referee as voted by the players of the Elitserien.

The competition in the Swedish Elitserien is considering to be one of the most evenly matched in all of hockey. An IIHF study found that the SEL ranked just above the AHL, the German DEL, the ECHL and the NHL in terms of balanced standings. The ranking is based on imbalance of a data distribution, such as points in standings and the Elitserien proved to be the least imbalanced meaning you never really know who’s going to win. What makes the SEL so competitive is their promotion/relegation system in which their is added pressure to succeed or else facing playing a few seasons in tier two. Nobody will argue that the NHL is the top competition for hockey in the world, but if you're looking for balance then the Swedish Elitserien might be what you're looking for.

Posted by Dirty Dangle at 5:55 PM
Email ThisBlogThis!Share to TwitterShare to FacebookShare to Pinterest