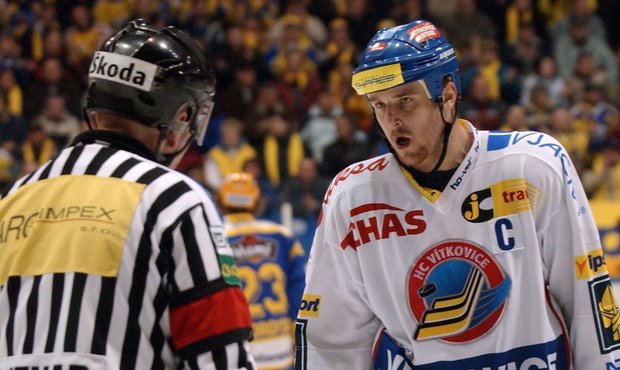 Pavel Kubina signed with HC Vitkovice Steel on September 16th, but is yet to play a game for the squad in their Czech Extraliga season. While there are plenty of players who are getting in better game shape (Evander Kane not included) before joining their European clubs, Kubina hasn't been playing as he is serving a suspension that dates back to April 2005.

As he started his professional career with Vitkovice in 1993-94, it was an easy decision for Kubina to head back there during the 2004-05 Lockout and Kubina would help the team make the semi-finals before being knocked out of the playoffs by HC Hamé Zlín in a game seven showdown. Following that last Vitkovice game in 2005, Kubina called the referee of the game, Petra Bolina, a "corrupt bastard" and accused him of taking a bribe. Vitkovice had been up in the series 3-1 and in the seventh game gave up several powerplay goals that ultimately led to their demise. Disagreeing with the penalties called and the frustration of being eliminated after leading a series 3-1, Kubina's comments sounded like a natural reaction from any player in the heat of the moment, but were dealt with very seriously.

For breaching the good name of the Czech Extraliga, Kubina got served a 15-game ban and was fined 200,000 koruna (over 7,000 Euro). The fine was a record for Czech ice hockey and the head of the Extraliga also asked the Czech Ice Hockey Federation to leave Kubina off the World Hockey Championship roster that year. The latter would not happen and Kubina would help the Czech's win the gold medal in Austria with 2 goals and 2 assists. On top of the suspension and fine from the league, Bolina also slapped Kubina with a slander suit and was awarded a payout of 14,000 Euros and public apology from Kubina which he subsequently appealed on principle and lost. We're convinced John Tortorella would be banned for life if he coached over there.

Kubina has now served 9 of those games and would be eligible to return November 2nd, but he could return earlier as having served half the ban he can apply for a waiver of the remaining games. Kubina is still training in North America without an NHL contract so the 35-year-old's best bet for hockey will be to join the Czech team following the ban and try to earn an NHL contract when the Lockout ends. Maybe he'll return to the Maple Leafs and add to this tribute video that lasts a whole 41 seconds.

Posted by Dirty Dangle at 2:26 PM
Email ThisBlogThis!Share to TwitterShare to FacebookShare to Pinterest