Have you heard of John Gaudreau? Not many casual hockey fans have, but the Calgary Flames are pretty excited about their 4th round pick (104th overall) in 2011. Gaudreau had first round round talent, but slipped in the draft because of his size. At the draft he was listed as 5'6" and 140 pounds. No that's not a typo, he really was 140 pounds.

Gaudreau grew up playing hockey in The Swamp (New Jersey) until he left to play for the Dubuque Fighting Saints in the United States Hockey League. In his only season with the Fighting Saints, he led his team in scoring with 36 goals and 72 points in 60 games and finished 4th in league scoring. Gaudreau's offence helped the Fighting Saints win the USHL Championship (the Clark Cup) and for his efforts Gaudreau took home the USHL Rookie of the Year honours. It's worth noting that Gaudreau looks to be the same size as the Clark Cup: 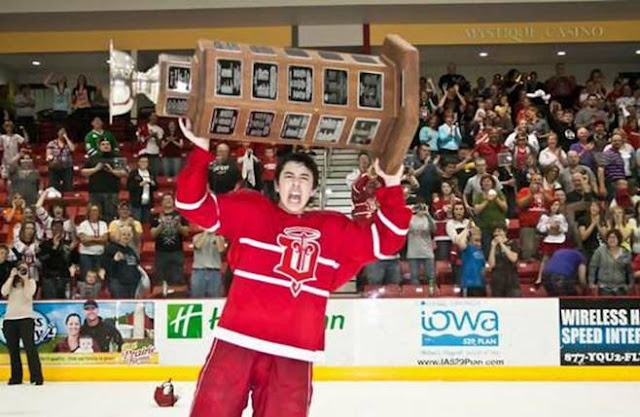 After his stint with the Fighting Saints, Gaudreau ended up with the Boston College Eagles in the NCAA Division 1 Hockey East conference where he would shine as a freshman in 2011-12. Scoring 21 goals and 44 points in 44 games, Gaudreau would lead all freshmen in scoring and finished just one point behind New York Rangers prospect, Chris Kreider, for the team lead. Kreider went on to join the Rangers for their playoff run and didn't look out of place in the NHL playoffs just to give you an idea of what type of season Gaudreau put up as a rookie.

The Boston College Eagles were a powerhouse last season and finished their season by winning their last 19 games of the season. It was no surprise that Boston College won the 2012 Beanpot Tournament and then won the National Championship Frozen Four tournament with Johnny Gaudreau playing a big role in these victories. Gaudreau once again picked up some offseason hardware and was awarded the Bill Flynn Trophy as Hockey East MVP in addition to being named the MVP at the Beanpot. Check out this beauty goal he scored in the National Championship game to give Boston College some insurance:

Gaudreau has the hockey IQ and blazing speed to get in and out of the heavy traffic areas without getting levelled and has been compared to another small-skilled player, Martin St. Louis. Gaudreau will have to add some muscle and bulk up if he wants to make it all the way to the NHL (now he's 5'8" and 153lbs!), but so far he has scored and put up points at every level he has played so this might not be a problem if he's going to be Marty St. Louis 2.0.

The 2012-13 NCAA Division 1 hockey season is just starting up and John Gaudreau will be one of the players I will be stat watching for as Boston College looks to repeat their great 2011-12 season. Gaudreau might not be a lock on a talented USA team at the 2013 World Juniors, but we hope he makes it as he would bring back memories of Nathan Gerbe at the tournament.

Posted by Dirty Dangle at 11:13 PM
Email ThisBlogThis!Share to TwitterShare to FacebookShare to Pinterest