While there is a scene in which Roger Moore is attacked by hockey players in the movie, this is an extended version, so let's break it down:

First off, when the villains skate out on the ice after 007 all we can think of is when the Hanson Brothers take their first shift in Slapshot.

It looks like Bond can take a hit as he is rocked and tumbles across the ice only to be hit again from behind by a player wearing a resemblance to a Montreal Canadiens jersey and a bucket that looks like something Pat LaFontaine would have worn.

Following that, Bond is finally hit from behind into the endboards by the goalie. What kind of villain dresses up as a goalie? Oh, riiiiiight. 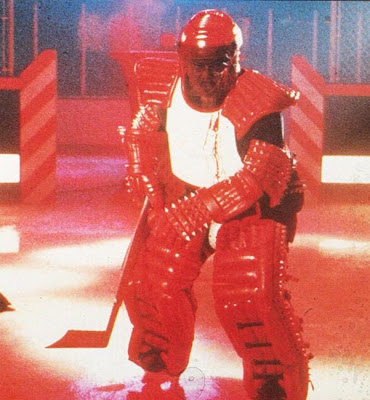 Bond then avoids a Chris Pronger stomp to take out one of the villains before fending off a Ron Hextall-esque attack from the goaltender.

Apparently there is a scorekeeper watching this assault take place as when the goalie is hit into the net the goal horn goes off. Bond 1, Villains 0.

Bond then avoids a skatekick and dumps another villain into the net. Bond 2, Villains, 0.

The conveniently parked Zamboni in the corner of the rink is then utilized by Bond as he fires her up and hits the attacking Montreal Canadiens player into the net which crumbles like a $10 street hockey net.

We've actually seen a guy get hit on the ice by a Zamboni in person and it is as funny as it looks. Final Score: Bond 3, Villains, 0.

Bond isn't done though as he dumps all the snow from the Zamboni onto the three villains now trapped in the broken net before cockily walking off to presumably have sex...