We all had our favourite places to play ball hockey when we were kids where the hours would just fly by. Heck, we all had back up places to play in case of parked cars or if some other kids with more muscle grabbed your spot first. These ball hockey barns were where you practiced your dangles, learned how to go backhand shelf with ease, and paid the price for stickhandling with your head down as your older brother slammed you into garage doors. As the Lockout continues and fans long for the game they love, we just want to remind you that you can always go back to your roots and play some street hockey to get your fix. It sure beats complaining about no NHL hockey on Twitter.

Let's check out some of the best places to play some ball hockey over the years.

The Street Corner is a great place for ball and roller hockey. It gives you plenty of space to go wide on guys and shots that miss the net just end up on a lawn for easy retrieval. The Corner was always perfect for a game of two-on-two, hog or even a full corner-to-corner game with friends. The downside to the corner is there are more stoppages of play because of traffic coming from four different directions. Also, you felt like a bad ass because you'd look at the "No Ball And Hockey Playing" sign and be like "fuck that." 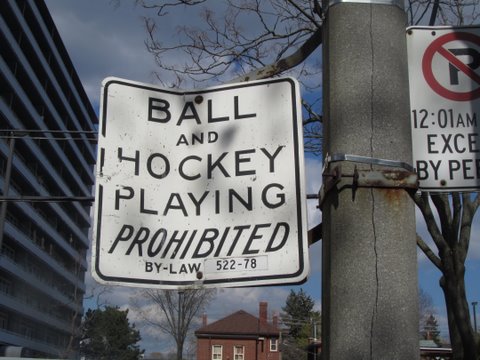 In Front Of The House

When you are young this is a perfect place to play so your parents can keep an eye on you, but once you get older and you miss the net on a shot there is a good chance you are breaking some glass. I had a buddy break my parents front window in grade 7 with a slapshot. I can remember watching my friend just book it up the street as I had to walk in get ripped on by my Dad. In front of your house is still a good spot for taking some shots before Hockey Night In Canada or playing a competitive game of Posts over some beers.

While the kids in D2 made playing ball hockey in South Central cool, ball hockey has been going on in these cages for decades as they are ideal for size and minimum stoppages. Often these courts are empty and don't even have nets or posts set up any more so they're just waiting for a ball hockey game to be played on them. Grab your hockey nets or even just tip over some garbage cans and you're good to go for hours.

Growing up we would go down the street to the one laneway in our area and challenge the kids there. We even once had a series for control over the laneway and we won and got the laneway for a year. It was pretty serious shit when you were 10 years old and taking control of turf thanks to your wrist shot. The only downside to laneway ball hockey was we were always denting garages and having to run away from pissed off neighbours while wearing full goalie gear and carrying a net.

As we got older and our parents got tired of fixing broken windows, we were sent off to the school parking lot to play. We had a newer school open just down the road with a freshly paved parking lot which was amazing for roller hockey. We would go there at night when it was lit up and there were no cars except for a couple of shortbuses in one area of the lot that gave new meaning to going into the corners. The only downside was sometimes if you bodychecked someone against this garage door it would set off a silent alarm and the toy cops would come and yell at us - once they even accused us of being on top of the school roof... in rollerblades... that's just crazy...

Posted by Dirty Dangle at 11:11 PM
Email ThisBlogThis!Share to TwitterShare to FacebookShare to Pinterest