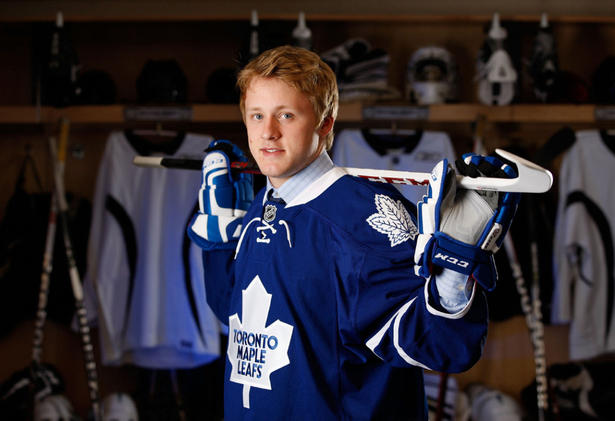 The Leafs young d-man is no stranger to the big stage having participated in last years Super Series, the Telus Cup in 2010, the Ivan Hlinka Memorial Tournament, the U17 Tournament, and this past August in the Canada-Russia Challenge. He's put up points in all these events and the next step is for Rielly to help Canada bring back a gold medal at the World Junior Championships in December. Rielly has had a great deal of success on the ice, but it really hasn't been easy.

Just like the 3rd overall pick in 2012, Alex Galchenyuk, Rielly missed most of his draft year with the same injury, but still impressed enough to get selected 5th overall. During the 2011-12 season, Rielly started off on fire with 18 points in 18 games before he tore his ACL and missed the remainder of the season before returning for the WHL playoffs and putting up 3 apples in 5 games. You usually see a drop off in performance after serious injuries, but Rielly worked hard to get his game back to where it is and is now one of the most talked about prospects from that 2012 Entry Draft.

There is always the extra attention a Maple Leafs prospect might get as crazy Leafs fans follow their every step, but there seems to be something special with Morgan Rielly. He isn’t the flashy forward like Nazem Kadri who you love or hate. He isn't just the great team guy with limited skills like Luke Schenn was. Rielly seems to be the whole package and Brian Burke has said it numerous times that he would have taken Rielly with the 1st overall pick ahead of Nail Yakupov.

Rielly is an offensive defenceman who would give Jake Gardiner a pretty good run for best skater in the Maple Leafs system. His passing, puck skills and offensive awareness are all elite and he is showing that so far this year with the Moose Jaw Warriors with 21 points in 23 games this season to rank second overall in league scoring. Rielly's coaches have even said he started off slow this season as he is still getting used to playing with a brace on his knee from the surgery last December. So with that said we can look for a strong second half this year from Rielly in the WHL... or maybe the NHL as Leafs GM Brian Burke has said that Rielly would get a chance at training camp to crack the Maple Leafs roster if the NHL Lockout ends..

Posted by Dirty Dangle at 7:55 PM
Email ThisBlogThis!Share to TwitterShare to FacebookShare to Pinterest