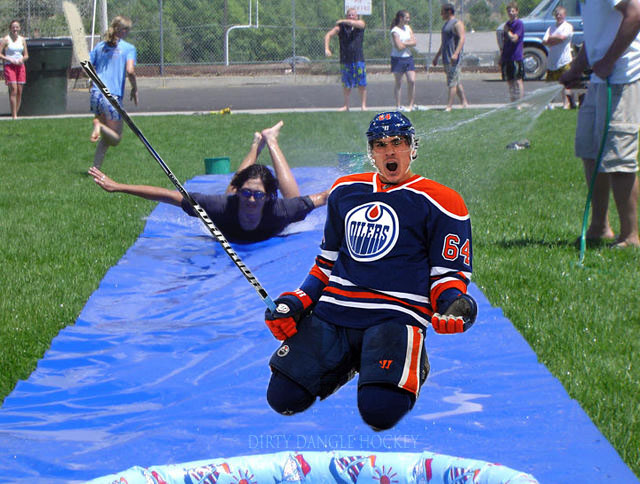 Nail Yakupov tied up a controversial game against the LA Kings with 4.7 seconds left on the clock that has hockey fans shaking their heads. After a Ryan Nugent-Hopkins game-tying goal was called back with just over a minute remaining, Yakupov provided sweet justice by scoring a ridiculous goal and following it up with a full-ice slide celebration:


We weren't kidding about the full-ice slide. This is the first big goal of Yakupov's NHL career and it's great to see him showing that emotion. Sure he'll draw some fire from the critics for blowing past his teammates to celebrate in the spotlight by himself, but that's is what the NHL needs right now. He showed emotion and was having fun out there. He didn't embarrass anyone, although it's not everyday you see a 19-year-old rookie make the reigning Conn Smythe Award winner bury his head in the ice. The slide brought a lot of comparisons to Theo Fleury's game six OT winner in the 1991 Stanley Cup Playoffs, although since that was against the Oilers so we're sure Edmonton fans will call this celebration The Yakky from now on.

Posted by Dirty Dangle at 1:55 AM
Email ThisBlogThis!Share to TwitterShare to FacebookShare to Pinterest