Read more »
Posted by Dirty Dangle at 1:50 AM 2 comments
Email ThisBlogThis!Share to TwitterShare to FacebookShare to Pinterest

Players Pierre McGuire Has Ruined For Us

Pierre McGuire is well known in hockey circles for his over-the-top calls and player hard-ons. Hell, he even has his own drinking game. For those that have had the honour of listening to Pierre during the World Juniors or between the benches in the NHL, you know exactly what we're talking about. It seems as though Pierre McGuire knows where every hockey player was born and knows their grandparents names. His colour commentary is often useless and his love for certain players goes deeper than a mothers love for their child. Perhaps the biggest thing about Pierre are his catchphrases: "monster", "big body presence", "el-kabongo", and "fine young man" are just a few to name. Throw his random knowledge, player boners, and painful catchphrases together and you have a bonafide player ruiner. While he hasn't actually ruined any players careers, he's ruined the way we think about certain players when we hear their names.

Jonathan Drouin fell to #4 on International Scouting Services February 2013 NHL Draft Rankings, but he's still #1 in our hearts for the dangles he's been showing off recently. The QMJHL leading scorer had one hell of a shift today as his dominant Halifax Mooseheads pummelled the lowly Acadie-Bathurst Titan 11-3. Late in the 2nd period, Drouin took control of the play for about 14 seconds before dishing the puck to Stefan Fournier for an easy tap in.

Zdeno Chara is usually known for his size that results in big hits and guys getting ragdolled, but this afternoon the 6'9", 255lbs defenceman showed off some of his dangles. First, Chara pulled a spin-o-rama on rookie Jonathan Huberdeau, then shielded the puck from Stephen Weiss before going backhand shelf on Jacob Markstrom. Overall, it was a beautiful goal from an unlikely player.
Posted by Dirty Dangle at 4:41 PM 0 comments
Email ThisBlogThis!Share to TwitterShare to FacebookShare to Pinterest Henrik Sedin became the all-time leading scorer for the Vancouver Canucks last week and we quickly turned the feat into a drinking game by seeing how many other franchise scoring leaders we could name. Some of the franchise leaders are fairly obvious, but others will give you some trouble (which means more drinks!). The rules are simple, drink every time you guess wrong. To speed the game up and prevent overthinking, put a time limit on the game and give yourself limited time to make guesses. Get a friend to tell you you're wrong or write them out on a piece of paper if you have no friends, just make sure you have a drink in hand. 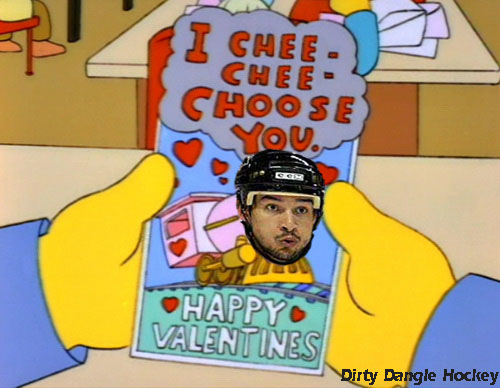 It's that time of the year again where we all say Valentine's Day is really stupid, but still end up spending like Glen Sather as a means to try and get laid. While most of us eagerly anticipate for the day to be over so we can get discounted chocolate and candy the following day, some people get really into it and like to buy their loved ones or crushes flowers and cards. Well, if you have a hockey fan as your Valentine then you've come to the right place for Valentine's Day hockey cards. 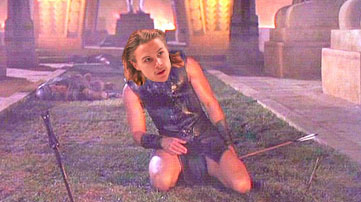 Erik Karlsson went down near the end of the 2nd period tonight and had to be helped off the ice without putting any pressure on his left leg. A laceration was first suspected as Matt Cooke's skate caught Karlsson above his heel guard, and then it was later confirmed that he would undergo surgery to repair a lacerated Achilles. For those familiar with such an injury, his 2013 NHL season is most likely doneski. Perhaps the scariest thing was seeing Karlsson try to push off and immediately scream in pain which reminded me of that disgusting scene in the movie Hostel.

Awards At The First Quarter Mark The NHL season is 12 games in which means we're at the first quarter mark of the season and it's time to make some award predictions based off a relatively small sample size! Looking at stats and not-so-deep analysis of how players have played, we've come up with the following results for who would take home the major awards if the season were to end today. Sure this all means shit with 36 games to go in the season, but it's interesting to see what players have been award-worthy out the gate.

Read more »
Posted by Dirty Dangle at 12:16 AM 2 comments
Email ThisBlogThis!Share to TwitterShare to FacebookShare to Pinterest

Struggling Out The Gate Phil Kessel is the poster boy for struggling NHL stars this season, but he's not alone in making fans scratch their heads. Kessel is just one of many NHL stars who aren't scoring like we expected them to and giving fantasy hockey owners fits. Could it be the rust from the NHL Lockout? Or maybe they let themselves go during the extended offseason? Who knows, but they are definitely not finding the scoresheet like we know they can.

It's crazy to think that Sidney Crosby's golden goal was 3 years ago and the next Winter Olympics are only one year away. Steve Yzerman and company will be sitting down over the summer and deciding who they want to come to the pre-Olympics camp. While it's easy to say which players will probably be going to the camp, actually picking a 23-man roster is fucking tough. Canada should have a very strong forward group with many skilled centres being forced to play wing and their defence core should also be pretty solid. The fun stuff comes to Canada's goaltending which is a big question mark with no #1 goalie standing out, but many great goalies to choose from. 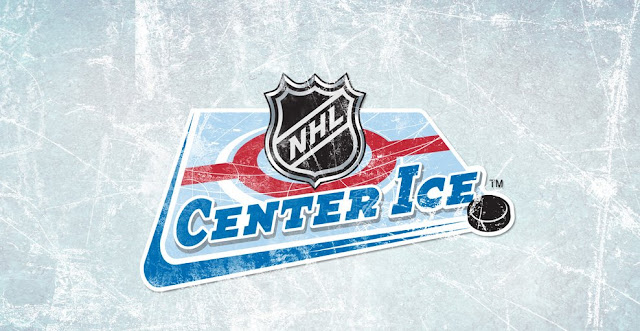 It's been a solid 13 days and nights of NHL hockey, especially when we were able to catch every single game on TV thanks to a free preview of NHL Centre Ice. Now it's time to say goodbye to our good friend, NHL Centre Ice Free Preview, and go back to watching our local team on TV and whatever national broadcasts are on. Sure we could fork over the $50 the NHL has priced the package at for the next three months, but when we say the NHL isn't getting a fucking dime from us this season we mean it.