Henrik Sedin became the all-time leading scorer for the Vancouver Canucks last week and we quickly turned the feat into a drinking game by seeing how many other franchise scoring leaders we could name. Some of the franchise leaders are fairly obvious, but others will give you some trouble (which means more drinks!). The rules are simple, drink every time you guess wrong. To speed the game up and prevent overthinking, put a time limit on the game and give yourself limited time to make guesses. Get a friend to tell you you're wrong or write them out on a piece of paper if you have no friends, just make sure you have a drink in hand.

With that said, here are the 30 current NHL team franchise scoring leaders (we put an * on the players still active with that team) and who's close to taking over:

The Finnish Flash has a solid padding on the franchise scoring lead, but if Corey Perry and Ryan Getzlaf hang around this offseason they could challenge his mark in 6-8 seasons.

This is one we don't see being broken anytime soon, if ever. The closest active Bruin to Bourque is Patrice Bergeron who sits 1096 points behind him. For those that are curious, Dougie Hamilton sits exactly 1500 points behind Ray now.

This might be another untouchable franchise record as there aren't even any current Sabres in the vicinity of 1000 points. Even if a generational player were to be drafted by the Sabres we doubt they'd want to stick around in Buffalo long enough to pass Perreault. Iggy has a nice cushion on this franchise record and it should remain his for many seasons to come. Well, until Sven Baertschi or Johnny Gaudreau pass him in 15 years.

Francis built up some good point totals with the Hartford Whalers/Carolina Hurricanes and he'll hang on to this one for some time as Eric Staal appears to be far away from returning to his 100-point season performance.

Mikita has over 1100 points on Patrick Kane for the franchise lead and do we really see Patrick Kane passing the 14th highest all-time scorer?

Nobody is touching Burnaby Joe's franchise record unless they change the scoring system to make assists worth 2 points. Matt Duchene sits at 167 points on his career at age 22 while Joe Sakic had 273 at the same age.

This is an easy one, but it's fun to look at who might take over the franchise record. RJ Umberger? Derick Brassard? Fuck, even Derek Dorsett sits 27th all-time in Columbus scoring history.

Modano has a pretty comfortable lead for the Stars franchise, but if anyone is going to going to challenge him it's going to be Jamie Benn. Getting better every season, Benn should become a big point-getter and chip away every season as long as he remains in Dallas.

Untouchable. Steve Yzerman made it close and had his knees not fallen apart he might have had it. Put it this way, Pavel Datsyuk and Henrik Zetterberg's point totals together make them short of Howe's record by 431 points.

It's more fun to try and figure out when Taylor Hall, Jordan Eberle, Ryan Nugent-Hopkins, and Nail Yakupov's point totals will add up to this. We say 2017. 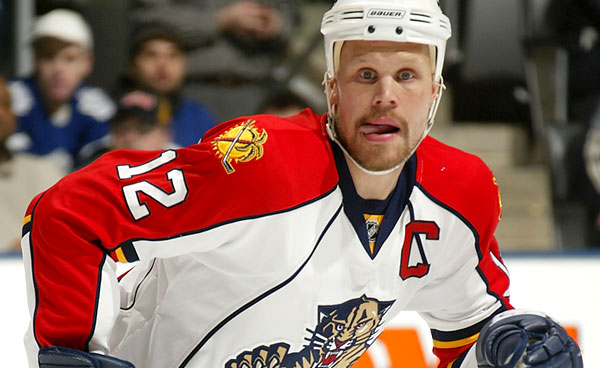 This one made us drink mainly because we've lost track of what teams Jokinen has been on. Stephen Weiss has a chance to take this title this season if he picks up his scoring, but long-term you have to like Johnny Huberdeau's chances.

Dionne absolutely tore it up for the Kings in only 921 games played, and his record should stand for a very long time. Anze Kopitar is the closest active King at 443 points, but can you really see him hitting the 1000-point mark?

This record will fall as Mikko Koivu trails by only 64 points, but long-term you have to like Zach Parise eventually getting up there in the 13 seasons he's signed on for.

Nobody on the current Habs roster is even close to this total and it should hold for many years. The best chance at hitting this mark is probably Alex Galchenyuk, but he's a Russian-American so will probably be driven out of town by the time he gets close. This one we had to think about for awhile, but Legwand has been there since Day 1 so it makes sense. Martin Erat is within 40 points and should eventually catch Legwand for the Preds record.

Elias turns 37 in April and has only played for the Devils since they drafted him in the 2nd round back in 1994. The next closest current player in points is Travis Zajac and we don't see him earning his $46M over the next eight seasons with 100-point seasons.

The next active point leader is John Tavares with just 222 points so far in his young career. If he does spend his career with the Islanders and puts up Hall of Fame numbers he might have a chance.

Can't see this record getting broken anytime soon because the Rangers tend to deal young talent away for older expensive players. The next active Ranger is Marian Gaborik with 221 points. Still hard to believe only one player has hit the 1000-point mark in Rangers history.

Alfredsson is pretty much done after this season and should finish with just over 1100 points on his career with the Senators. Jason Spezza is next on the list with 621 points and talent wise could catch Alfredsson, but injuries might stop Spezza from passing him.

Claude Giroux sits at 256 points, but already at the age of 25 he will be hard pressed to catch Bobby Clarke even if he plays until he is 40. Clarke should hang on to this one for many years to come.

Hawerchuk tore it up for the Winnipeg Jets and his jersey now hangs in the middle of Arizona. Shane Doan is getting up there in age and is only 133 points behind so time is against him on this one.

This is a record that won't be touched as even elite players these days have trouble putting up 100 points in a season. Sidney Crosby is the next active Penguin with 633 points and our guess is he will get to maybe 1400ish points before he calls it quits.

Another guy who has been with his team since his draft year, Marleau has a 200-point cushion over Joe Thornton. If Marleau is traded, Jumbo Joe should take over, but long-term you have to like Logan Couture's chances.

Federko can sleep easy knowing that his franchise point record won't be broken for many years. Next on the list is David Backes with 283 points and he won't come close to Federko.

Lecavalier still has a few years left in him and with his unmoveable contract he will remain a member of the Lightning for years to come. Martin St. Louis is just 4 points behind Lecavalier with 853 points, but at age 37 should retire well before Vinny does. If Stamkos remains a Bolt for a long time he should have no problem taking over this record. Phil Kessel is the next active Maple Leaf with 213 points and people are already wondering if he will be traded or if he will resign. This will be a record that will last for years.

Twin #1 Henrik just passed former Swedish captain Markus Naslund to take over the franchise lead. Twin #2 Daniel sits just behind his brother with 731 points. It's hard to see either Sedin leaving the Canucks franchise so expect some back-and-forth action until they retire.

Bondra has 136 points over Alex Ovechkin so he should enjoy this title for another two three seasons before Ovechkin passes him. Ovie should be a Capital for life and have a stranglehold on this record for many years.

Kovy leads the Thrashers/Jets franchise in scoring and the title should be his for quite some time. Next up on the list of current players is defenceman Tobias Enstrom with 217 points, but long-term you have to like Evander Kane's chances of catching him if he isn't driven out of town by the media.


Alright, game over. How did you score?

Posted by Dirty Dangle at 3:56 PM
Email ThisBlogThis!Share to TwitterShare to FacebookShare to Pinterest