Let's see how the NHLers look on the leaderboards across Europe:

Evgeni Malkin sits 3rd overall in league scoring after being passed by Alex Radulov yesterday. The NHL Lockout leading scorer's 23 goals and 65 points in 37 games will probably be good enough for him to finish the KHL regular season in 3rd as there is only 7 games left in the season and he has a 17-point cushion on 4th place. Ilya Kovalchuk sits 8th overall in scoring and Alex Ovechkin sits 13th overall, but expect both to finish out of the Top 20 by the end of the season. Sergei Gonchar's 3 goals and 26 assists are good enough for 7th overall in defensive scoring and 2nd overall in assists by defencemen.

Damien Brunner who left the Swiss NLA as the leading scorer has now been dropped to 3rd overall where he'll most likely remain with only 5 games remaining in the regular season and an 11-point cushion. Brunner also continues to lead the league in goals scored with 25, however he is in a tie for that title with Tyler Seguin who played 4 less games. There's a good chance both players are caught in the goal-scoring department, but to be among the top scorers and play 15 less games than the competition is pretty impressive. Other NHLers left their mark in Switzerland as well as only recently did Joe Thornton, John Tavares and Logan Couture lose their top scorer flame jerseys. 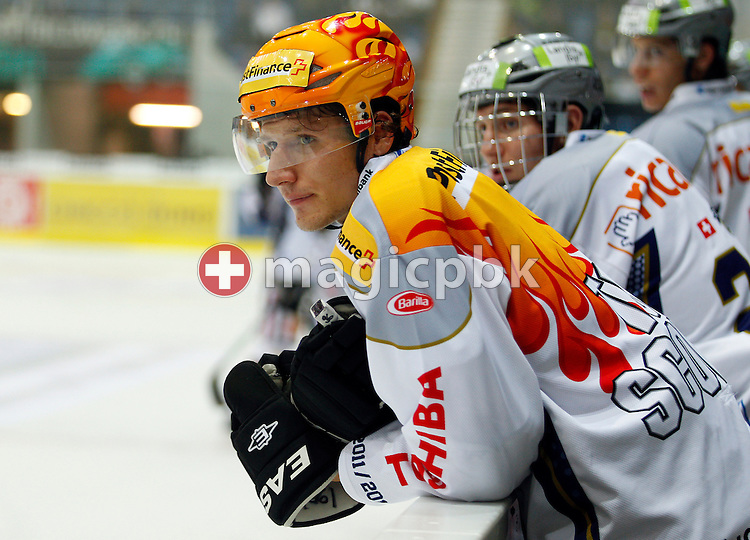 The reigning Norris Trophy winner, Erik Karlsson, remains the defensive leading scorer with 9 goals and 25 assists for 34 points in 30 games. With 12 games remaining in the Finnish season, Karlsson has an 11-point cushion on the next closest player and his 25 assists alone would make him the leading defensive scorer. He's  14th overall in SM-liiga scoring and his 248 shots on goal still have him ranked 5th in the league in that category. Karlsson legitimately has a chance at winning the Pekka Rautakallio trophy for best defenceman. Phoenix's, Mikkel Boedker, sits 4th in goal scoring with 21 in 29 games and trails the leader by 4 goals despite playing 20 games less than him. Safe to say who would have been winning that title had this NHL season not been saved.

Nick Bonino's 26 goals and 52 points in 19 games have him leading his HC Neumarkt Egna Riwega Wild Goose team in scoring by 5 points in half as many games played. With only 4 games remaining in the regular season, he may be able to hang on to the team scoring lead. Bonino still remains in the Top 10 scorers in the league at 7th overall and his 26 goals rank him 4th overall in league goal scoring.

In the Czech Extraliga...

The ageless wonder, Jaromir Jagr, remains 2nd in scoring with 24 goals and 33 assists in 34 games. With only 6 games remaining in their season, Jaromir has a good chance at finishing in the Top 5 scorers and probably as the top fantasy player in your Czech Extraliga Pool with a +22 rating, 28 PIMs and 11 powerplay points. Jagr's Czech linemate, Tomas Plekanec, sits 9th in total points with 21 goals and 25 assists, but should drop out of the Top 10 fairly easy. Plekanec also led the league in turtlenecks owned.

Despite a horrid start to the Czech season, Michal Neuvirth, left for the Capitals training camp with a 2.46 GAA and .927 save percentage which ranks him 4th overall in that category. Tuukka Rask's .925 save percentage is good enough for 6th in the league, while his 2.11 GAA remains one of the best in the league but isn't officially counted with only 17 games played. And in case you're wondering - yes - Ondrej Pavelec is still one of the worst goalies in the league.


In the Dutch Eredivisie...

Dale Weise's 56 points in 22 games still have among the top scorers. Had he kept playing there we're confident he would have erased the 11 point difference to 1st overall in the 12 games he's missed. Weise was a fucking god in the Netherlands.

While a handful of NHLers are sprinkled in the Top 50, it's Anze Kopitar who remains the highest NHL point getter in the league at 15th overall with 10 goals and 34 points in 31 games. Among goalies, Anaheim's Viktor Fasth sports one of the best GAAs at 1.68 and best save percentages with a .942 although his stats don't officially count towards rankings because he didn't appear in 40% of his teams games. Surprisingly, Fasth tallied those numbers with a 4-7 record.

Danny Briere is still in the Top 25 scorer with 10 goals and 24 assists through 21 games. That's good enough for 24th overall despite playing in half as many as games as his opponents. He is 16 points behind the DEL leading scorer and forgotten NHLer, Mike York. With 6 games remaining in the regular season, Sabres blueliner, Christian Ehrhoff, sits 2nd overall in defensive scoring with 26 points in 32 games. He has a little bit of a cushion and should finish in the Top 10 defensive scoring. 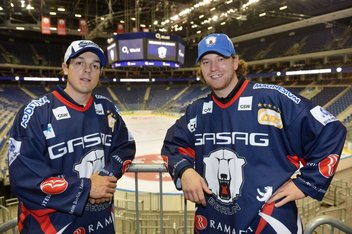 Paul Bissonnette's 1.91 points-per-game remain the best in UK league for players appearing in over 10 games. Yup.

Posted by Dirty Dangle at 4:03 PM
Email ThisBlogThis!Share to TwitterShare to FacebookShare to Pinterest