NHL '94 is getting a lot of love these days as the iconic video game celebrates it's 20th anniversary. Every site seems to rolling out some sort of tribute to the game, and all of it well-deserved. NHL '94 was a game changer. Playing with real NHL players on real NHL teams for the first time in 1993 was a dream come true. I can remember being in middle school when it came out and it was like "NHL94mania" all day, every day. Guys would have leagues going on with schedules made up for who would play where afterschool, some guys would play for money, and some guys had all the ratings memorized to the point that they would write out line combinations during class. It was truly an exciting time in the world of video games, and it's no surprise the game has been getting so much love since it's debut 20 years ago. With that said, here are our favourite tributes to NHL '94 over the years:

While most of these kids probably couldn't even hold a controller when NHL '94 came out, you have to respect their tribute even if it is slightly off from the celebrations in the game. The two-handed stick raise captures the essence of early hockey video game celebrations in that it is simply hilarious.

This website is practically a shrine to the game and features everything from user submitted highlights to Ron Barr quotes. It also features an online gaming community with leagues and tournaments played year-round. The creators and community have definitely kept the legend of NHL '94 alive and well with this website.


Yes we know the gameplay is NHLPA '93, but Sue, Trent, and Mike address the issue of the removal of fighting from NHL '94 so we know what they're talking about. If there's one thing the irks me about the most recent games in the EA NHL series it's that I can't make anyone's head bleed. 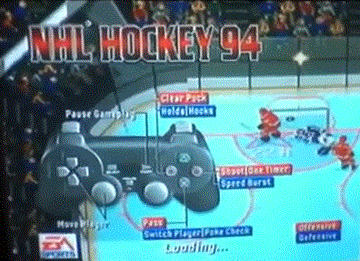 NHL '06 included the option of playing NHL '94, although you played with no name players so it wasn't a true throwback feel. Putting the gameplay of a game created over 12 years prior on a Playstation 2 disc just speaks volumes to the legend of the game, but perhaps the biggest inclusion is the option to use NHL '94 controls in recent years. Forget the analog controls and extra 10 buttons, you can revert back to arcade style controls and play with softcore gamers.

NHL.com Highlights Get The NHL '94 Treatment

NHL.com has been celebrating the 20th anniversary of the game over the past few weeks by editing their highlights with NHL '94 graphics and sounds. This was their first one and it was great capturing all the sounds you remember, but then they added more:

Adding the user-control star under Kane, the NHL.com guys started to get more creative, until they simply said fuck it and made the ice blue and did a full-game highlight reel package:

Do you have any favourite NHL '94 tributes?

Posted by Dirty Dangle at 4:33 PM
Email ThisBlogThis!Share to TwitterShare to FacebookShare to Pinterest