How Are The NHL Rookies Doing This Year? 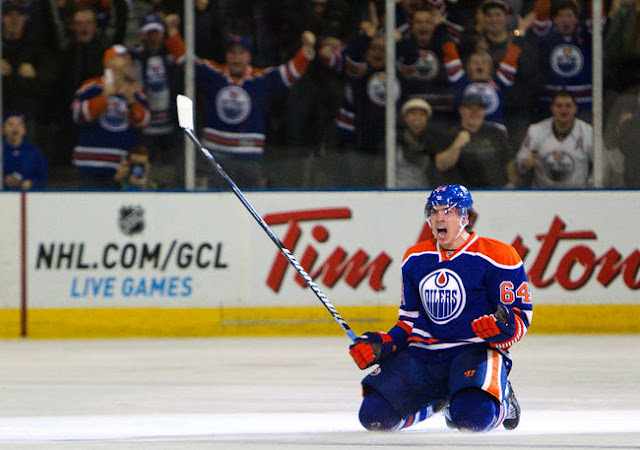 There were some high hopes coming into a shortened NHL season for the new crop of rookies. Having been playing hockey full-time in either the AHL, KHL or junior, these kids were among the minority of current NHLers playing hockey regularly during the stupid Lockout. This definitely gave them an advantage coming into their first NHL season in mid-season form and looking to make an impact when it really matters in a 48-game season. Well they haven't disappointed and have been big parts of their teams success halfway through the season.

With that said, let's check in on some of the highly-touted rooks and some that have surprised us with their play in this 2013 NHL season.

Here are a handful of players who were primed for big rookie campaigns and were expected to be top Calder candidates.

The 3rd overall pick from 2011 was a lock to make the team and has proven so far that he belongs in the NHL at age 19. He has been protected a little bit by using him as a LW this season instead of at centre, but Huberdeau is leading all rookies in goal scoring with 11 goals in 23 games. Throw in 5 apples and he's got 16 points to rank 2nd among rookies in points. Huby is definitely getting scoring chances with 67 shots on goal already this season so don't be surprised if he's the only rookie to net 20 goals in this shortened season.

After putting up 48 points in just 34 games in the AHL to start the year there was a huge amount of hype surrounding Schultz coming into this season and so far he has lived up to it. He is tied for 3rd in rookie scoring with 13 points in 22 games and has been quarterbacking the Oilers powerplay to 9th overall in the league. Oh yeah, he still has an 11-point cushion in the AHL defensive scoring race and has a 2-point cushion on AHL rookie scoring so there's a chance he could win the Eddie Shore Award for top AHL defenceman and the Dudley "Red" Garrett Memorial Award for AHL rookie of the year.

Anytime you are a 1st overall pick there will be high expectations to succeed and so far Yakupov has had a solid rookie season. Averaging just over 14 minutes a night he has put up 6 goals and 12 points in 22 games including a memorial first NHL goal. Like many of the other young Oilers, Yakupov will have to work on his defensive game as he is already a -10 on the year. Regardless, the kid has been really fun to watch and continue as he develops.

Tarasenko started this season on fire with 10 points in the first 8 games but cooled off and only managed 2 points in his last 9 games. He was able to show off his offensive game when the Blues were hot, but when they cooled so did Tarasenko including a stretch that saw him be a minus player in 5 straight games. Tarasenko hasn't played since Feb 20th after suffering a concussion, but 6 goals and 12 points in 17 games are a very solid start to his NHL career.

The 3rd overall pick from last summer is looking like a great pick for the Canadiens as he sits tied for 3rd in rookie scoring. Galchenyuk has been getting 3rd line minutes and has posted 3 goals and 13 points in 23 games so far this season. With just over 12 minutes of ice time a game, Gally has been a respectable +5 on the year and helped the Habs to 1st overall in the Eastern Conference. Definitely a future 1st line centre for the historic club.

Here are the rookies that have surprised us so far this season and have earned the right to be mentioned as Calder candidates at the halfway mark.

The undrafted 23-year-old is looking very much like a Marty St. Louis 2.0 with the Lighting. He posted great numbers in the AHL last season notching 80 points in 75 games and through 23 games he is leading all NHL rookies in scoring with 20 points in 23 games. He's found the net 7 times and benefited greatly from playing with St. Louis and helping to feed the NHL's leading goal scorer, Steven Stamkos.

Gallagher has been a shit disturber for the Canadiens this year by getting under the skin of the opposition and chipping in with some offence. He has surprised us all by scoring 6 goals and putting up 13 points in 19 games for 3rd in rookie scoring. Gallagher has also played well defensively and ranks 1st among NHL rookies with a +10 rating. Not bad for a 5th rounder.

Shore is a 2nd round pick from the 2009 Draft and the 22-year-old currently has 10 points in 21 games for the Panthers. He is playing just under 16 minutes a night and should have a larger role with the team for the rest of the season with the season ending injury to Stephen Weiss. Despite his 2 goals on the season, Shore has been getting all sorts of scoring chances this season and ranks 2nd in rookie shots with 61 on the season. Keep an eye on him in your fantasy leagues.

It might have been the Leaf fan in me, or the fact that Boston's defence already looked so solid, but I didn't think Hamilton would be performing this well as a 19-year-old. I was wrong about the Beaker look-a-like as he's put up 3 goals and 12 points through 20 games to put him 2nd in defensive rookie scoring. While he's obviously making some defensive mistakes and is the only regular Bruins d-man with a minus rating, his offensive ability is why he's impressing and should be a staple on the Bruins powerplay for many years to come.

Posted by Dirty Dangle at 1:43 AM
Email ThisBlogThis!Share to TwitterShare to FacebookShare to Pinterest