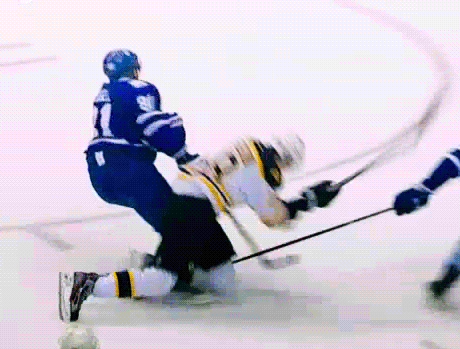 This past weekend while watching the Leafs/Bruins game we witnessed a rare occurrence: a legitimate Phil Kessel hit. We took a guess at how many hits the Leafs sniper had this season and overestimated at around 15. We assumed that Phil Kessel must have at least one hit every other game just from bumping into an opposing player or having a friend in that statistician recording hits. Well, that hit on Tyler Seguin was his 8th hit of the season (in his two games since he still has 8 hits). Now there's nothing wrong with Kessel not hitting, that's not his job, we just figured he would have more than 8 in 34 games.

Hit stats are often all over the place and you often wonder if the guy keep tracking is half in the bag, but 8 is pretty low in 34 games regardless of your talent level. Just going into the corners or taking a puck off a guy you think you'd give a guy a nudge or knock him over, but not in Kessel's case. Hitting is part of the game and is a way of getting the puck off opponents. At 6'0" and 202lbs you'd think Kessel might use hit size more to get the puck and create a scoring chance. Surprisingly, Kessel would be on pace to set a career high in hits over an 82-game season with 19 (his previous high is 13) and since it's a shortened season we're going to have some fun with this.

The challenge my brother proposed to me was that once the season ends I will drink as many beers as Phil Kessel has hits. So far Kessel is on pace for 11.3 hits in a 48-game season. I know some of you young guys out there are like "12 beers is nothing pussy", but for a guy like me who doesn't party it up like I used to a twelve pack would get me to the point where my shirt is off most of the night. Obviously I'm betting on Kessel avoiding any one on the ice and finishing lower than 12, or else it will be a long day of playoff hockey in May.

Care to join me in the Phil Kessel Hits Drinking Challenge?

Posted by Dirty Dangle at 5:33 PM
Email ThisBlogThis!Share to TwitterShare to FacebookShare to Pinterest