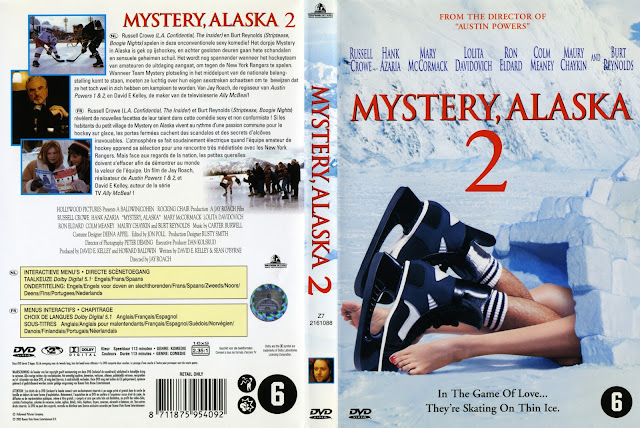 Four years after the town of Mystery, Alaska hosted the New York Rangers in an exhibition game on their own pond, it is revealed in Mystery, Alaska 2 that much has changed since we last saw our favourite hockey-playing small town. The town of Mystery saw a big boom in business as their nationally televised game against New York boosted tourism in the area and actually had a negative impact on the town and their hockey. The story also shows life outside of Mystery and focuses on the young rookie, Stevie Weeks, and the town grocer, Connor Banks, who left with the New York Rangers on a pro tryout.

While it is revealed Weeks and Banks did not make the Rangers, they were good enough to earn a contract with the Trenton Titans of the East Coast Hockey League. Despite playing in New Jersey, the two small town boys are addicted to the bright lights of New York City and continue to live there like most people that have to work in New Jersey. Still haunted by his premature ejaculation with Marla Burns in the snowplow, Weeks becomes addicted to rub and tugs in the big city and struggles with his addiction to neon lights that read MASSAGE. Banks on the other hand has been in and out of court for years now fighting appeals on his 1999 shooting of the Priceworld businessman. Overcome with the stress, the grocer finds relief in drugs and hides his pain from his roommate and the folks back home in Mystery.

In Mystery, the town copes with the flood of tourism and people wanting to "skate the river" to prove their conditioning. Unfortunately, with the amount of skaters on the river and global warming, the ice is thin and tourists have been falling through the ice. The town is rocked by a series of drownings and Sheriff John Biebe is forced to shut down the river for safety reasons. The tourism is greatly affected by these deaths and the town gradually begins to return to it's former isolated self.


Catching up with the regulars of the Saturday Game in Mystery, Biebe still holds a spot in the game with the departures of Banks and Weeks. He is also aided by the multiple sexually transmitted diseases Skank Marden has contracted from tourists visiting the town that have made him unavailable to play in the Saturday Game on numerous occasions. Tree Lane continues to be a rock on the blueline, but has had his fair share of trouble off the ice fighting tourists who speak ill of Mystery. The Winetka brothers continue to be the Sedin's of Alaska and cycle so well together that they are no longer allowed to be on the same team. Disbarred following his handling of the Banks v. Priceworld case, Judge Walter Burns, now coaches the Saturday Game with a flask in his pocket and slurs orders at the players.

As the spiral in New York is about to hit rock bottom, the Titans coach informs Weeks and Banks that they have been traded for their own health and well-being. They are going back to Alaska to join the newly formed Alaska Aces in Anchorage. They'll be closer to home which they have longed for and away from the drugs and neon lights of New York City. Before joining their new team, the boys head to Alaska to see the townfolk and are greeted as heroes. Weeks reunites in the snowplow with Marla where she is surprised that he lasts for over an hour due to four years and thousands of dollars spent practicing.

The movie ends with John Biebe inspecting the river ice and determining that it's safe enough to skate on before stepping on and skating the river with his now teenage son who skates with the "jump" of a young Stevie Weeks.