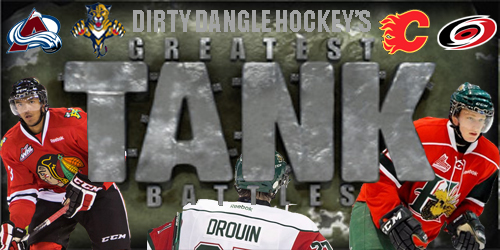 The race to the bottom of the NHL is always one to watch out for as the team's that are officially eliminated from playoff contention jostle for better drafting positions. Now, while NHL teams will say they're not tanking, fanbases looking to draft their next future star will actively be cheering for losses. Last season, the Columbus Blue Jackets locked up the last overall spot fairly easily as they trailed the 29th place Edmonton Oilers by 9 points at seasons end. This year however, there are plenty of teams in contention for the best odds at winning the draft lottery.

Let's take a look at how this race is shaping up as we enter the final week of the 2013 NHL season: 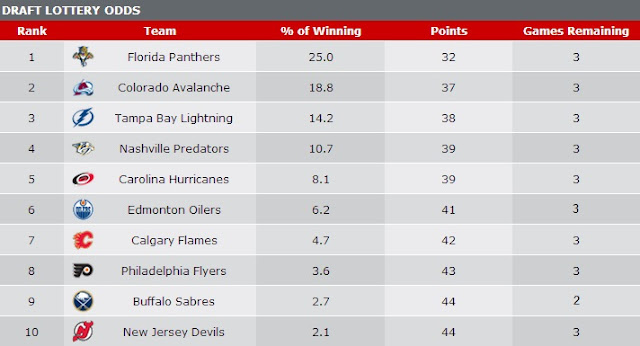 The Florida Panthers are looking like the best bet to enter the Draft Lottery with a 25% chance at 1st overall. Having dropped 6 in a row and trailing the 29th place Colorado Avalanche by 5 points, they would clinch last place with a single loss. With 3 games remaining including games against hungry playoff teams like the New York Rangers and Toronto Maple Leafs, they should clinch 30th overall very shortly. Who should Florida draft? Jones to anchor their defence or MacKinnon to feed Huberdeau for the next 10+ years?

The Colorado Avalanche were sinking in the standings pretty fast before J.S. Giguere called the team out for already planning their end of season trip to Las Vegas. Well, in their past 10 games they've climbed out of the league basement and could find themselves reducing their lottery odds even more as they keep stringing points together. One of the top prospects available would look great with Landeskog and Duchene as the Avs continue to rebuild.

Steven Stamkos will be getting a new stud rookie to play with soon and how nasty would he and Jonathan Drouin be? With Marty St. Louis' career winding down the Lightning will look for a new playmaker to feed Stammer one timers and they'll get a good one as long as they keep shitting the bed. Having gone 2-6-2 in their past 10 and with remaining games against the Leafs, Bruins and Panthers they should finish in the bottom 5 easily.

The Preds simply can't score. They have the 2nd worst scoring in the league and should be seeking a top draft pick that can put pucks in the net. Shea Weber leads the team in scoring with 24 points, just 1 point ahead of David Legwand. That's kind of embarrassing  They'd be best to forget this season ever happened and start fresh next year with a top prospect in waiting.

On the topic of shitting the bed, that is exactly what the Carolina Hurricanes have done in the past month. They were leading the Southeast Division at the halfway mark and have since fallen to the bottom 5 in the NHL thanks to a brutal skid that saw them lose 17 of their past 20 games. Already a scary team on paper with Ward, Staal's, Semin and Skinner, the Canes will be adding another top prospect to their shelf following a disastrous 2013 season.

If we are talking about tank battles, I guess the Edmonton Oilers need to be included in this considering they've have had the top pick the past three seasons. The Oilers came into this season with a lot of hype and many felt this was going to be a playoff team with the kids taking another step forward in their development. Well, other than Taylor Hall and Sam Gagner having strong years this team is still sitting at the bottom of the league. You gotta figure they just draft the best defenceman available.

The one team that might need a top prospect the most is Calgary, but once again they are looking to finish just outside the playoff picture. The Calgary Flames are finally realizing that they need to rebuild and not just keeping overpaying free agents to try and push for the playoffs. Dishing out Iginla and Bouwmeester was a great step, but the Flames keep winning and killing their fans hopes of a top pick. They now sit 24th overall in the league after going 6-4-0 in their last 10. The Flames can't even tank properly.

Perhaps the greatest thing about this upcoming draft is that no matter how badly a non-playoff team did they are eligible for that 1st overall selection meaning a team like Philadelphia could end up winning the lottery. But let's be honest, Paul Holmgren would probably trade it away.
Posted by Dirty Dangle at 11:13 PM
Email ThisBlogThis!Share to TwitterShare to FacebookShare to Pinterest