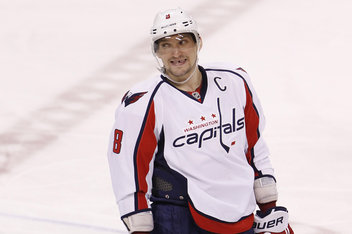 Not many guys take as much heat in the NHL than Alex Ovechkin. From steroid accusations to Mike Milbury rips, Ovechkin takes plenty of criticism when he's not scoring at a 65-goal pace. Well now he is. Just take a look at his stats since March 14th:

Four weeks ago, the Washington Capitals sat 14th in the Eastern Conference and 29th in the NHL with a 10-14-1 record. Since then they've strung together a 10-3-1 record to move to the top of the weak Southeast Division and if they keep rolling like they are they'll enter the playoffs with home ice advantage thanks to that 3rd seed for division leaders. Easily the biggest factor in the Caps resurgence has been Alex Ovechkin going ham.

Ovechkin's performance was disheartening to see. His talents are indisputable, and to see a player in his prime not scoring like he used to do just plain sucks for fans. Well, he's back (or at least temporarily). Taking a look at his last 14 games, Ovechkin has notched 16 (!) goals and 23 points for a goals/game pace of 1.14 and a points/game pace of 1.64. That's a stretch of games that reminds us of his 65-goal, 110+ points form. As hockey fans, this is great. We want to see the best perform their best, and Ovechkin is giving us shades of 2007-08. With 9 games left, he's not only gotten himself into the Maurice Richard and Art Ross races, but the Hart Trophy race as well.

Posted by Dirty Dangle at 3:09 PM
Email ThisBlogThis!Share to TwitterShare to FacebookShare to Pinterest