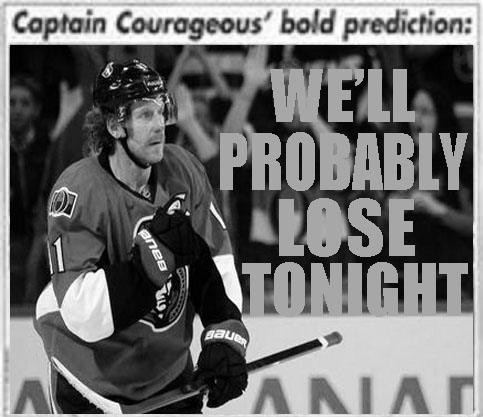 As a fan of the game I was pretty shocked to hear Daniel Alfredsson's comments after their last playoff game. Recently nominated for the Mark Messier Leadership Award, Daniel Alfredsson has been a pretty solid leader in Ottawa for most of his career and is a pillar of the franchise. Ask Siri and she'll even say Alfie is God. But after last night's loss he much pretty much tossed up the white flag, booked his flight home to Sweden and surrendered to the mighty Pittsburgh Penguins.

Here is the video of his comments


Teams can come back down 3-1 in series and they can also blow 4-1 leads in a game 7 with 10 minutes left. Hockey is a crazy sport and anything can happen so Alfie shouldn't be such a downer. You're a captain and sometimes you have to leave your emotions at the door and say the right things to try and help your team win. Can you imagine how deflating this would feel to teammates and fans. Your fearless captain who has led the team through his own boos admitting defeat. Will Ottawa fans turn on him? Probably not.

Posted by Dirty Dangle at 11:41 PM
Email ThisBlogThis!Share to TwitterShare to FacebookShare to Pinterest